Greg Leifeld learned to hunt at 39 years old. This growing trend of adult-onset hunters reflects the desire for people to be more connected to their food, and to nature.

Greg Leifeld was introduced in a previous post about adult-onset hunting and a new program developed by the Minnesota Department of Natural Resources (DNR) targeting non-hunters with the opportunity to experience hunting for the first time. We’re glad to report that Greg recently joined the ranks of hunters who don the finest of blaze orange clothing in an attempt to fill their freezer with venison.

After dedicating many weekends over recent months to classroom training, field orientation and gun-range practice, he was deemed ready to enter the woods with a hunting mentor. Like the nine other men and women in his class, Greg may have had a few reservations and questions about whether this is what he wanted to do, but that quickly melted away as the excitement built for everyone’s first “deer camp”.

Deer camp is a phrase with deep meaning for many people who hunt. It’s bringing together friends and family to commune in one of the oldest traditions known to man. It begins with the anticipation of the hunt that first night you arrive and then quickly shifts to story-telling of adventures in the woods, usually punctuated by statements like “really?” and “I couldn’t believe it, but…”. Many often say that it doesn’t matter whether they get a deer or not, and that it’s really the camaraderie of deer camp that they enjoy each fall. Varying degrees of this sentiment were expressed at this group’s first deer camp, but most were looking forward to the opportunity to fill their freezer with locally-sourced, antibiotic-free, hormone-free, free-range red meat.

Out of the ten students, three deer were harvested, or killed, to be more specific. Greg was one of those fortunate enough to fill his deer tag. A few days later several of them gathered at a mentor’s house to butcher the deer themselves. Most hunters these days take their deer to professional butchers to have the deer “processed” but this group of new hunters wanted to engage in the entire experience from start to finish. I have no doubt that this attitude, and hard work, will make the venison taste that much better.

Greg’s doe was shot cleanly through the heart. A great result from his diligent preparation for the hunt. The venison it provides will be a significant part of his family’s diet over the coming months. And next November I think Greg will probably head back into the woods, as a hunter with experience, and ready to learn more and experience all the the natural world has to offer. 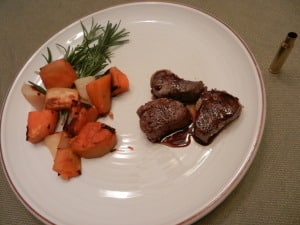 First venison dinner, proudly prepared by Olivia who was one of the students in the program.