Learn To Hunt?…But I Love Animals!

If you ask someone about their dream hunt, you rarely hear the word squirrel in the response. I suppose though that question is usually directed to a veteran hunter. He, or she, has usually experienced many different types of hunts during years in the field, and has had time to really ponder what a dream hunt looks like.

How I Started Hunting

I didn’t start hunting until I was thirty-six years old. I came to hunting by way of a suggestion by my new boyfriend in August of 2012. When I started dating Chance, he told me that I might like hunting. His thinking was that since I enjoyed fishing and being outdoors, that I would naturally be drawn to hunting. I refuted that idea instantly. “I love animals”, I told him that I could never kill an animal, not ever. But oddly enough, after he mentioned it again, I found myself sitting in a treestand one evening. I didn’t know that my life was about to change in a very significant way.

Cindy and Chance on a hunt

That first evening we had a piebald doe walk nearby. She winded us, and then announced to every living thing in the woods, that we were there. I didn’t understand what had just happened, but I knew my heart was racing and my palms were sweating. And, I was pretty sure I wanted it to happen again. I was intrigued. That intrigue led me to start asking more questions, which led Chance to give me a few pointers on shooting a long gun and a crossbow. Soon after that, I was in the woods, on my own, with the very lean instructions, “There’s a treestand. Figure it out”. I was on my own because, as he said, that was the way he learned. He said he was a better hunter because of it.

Days, and then weeks went by. I found myself in the woods and sitting in a treestand at every available opportunity. There were days that Chance and I argued. There were days filled to the brim with frustration. There were tears shed and feelings hurt, and there were days I just wanted to scream. I couldn’t, or wouldn’t, understand what I was doing wrong.

I would go back to the house and express why I was angry and Chance would just sit there and wait until I was done venting. He would then look at me and say, “Do you want to know why you aren’t seeing anything” or, “Do you want me to tell you why I didn’t even go out this morning”? He would then tell me, and in turn I would be even more angry that he wasn’t telling me all this stuff ahead of time.

I couldn’t understand why I was traipsing out there every single day, and he wouldn’t help me until AFTER I had screwed something up. As an aside, I don’t recommend this method of “tough love” mentorship for anyone. However, I soon discovered that it was exactly what I needed. I ended up killing a deer that year during gun season. This wasn’t your typical “first deer story”. I was in the backyard when I shot it and Chance happened to be watching out the bedroom window, standing in his underwear when it happened.

It wasn’t until a few years later that I realized how my life was changing. And it was all because I agreed to go sit in that treestand, on a Saturday evening, in early October.

About a year and a half prior to meeting Chance, I was freshly removed from a marriage riddled with domestic violence. I had been physically, verbally and emotionally abused for eleven long years. I was left with no self-confidence, no self-worth, and a sense of doubt about whether I was strong enough to accomplish anything in life. I was no longer the strong, mentally tough young woman of my early twenties. I was broken. I would never have guessed that going into the woods and failing day after day, at something I didn’t even want to do in the first place, would be the one thing that would make me whole, maybe for the first time in my life.

Every time I sat in that treestand I was learning something. I didn’t realize it that first season. But each season that followed, I was making decisions and making strategic moves that worked in my favor. I was gaining confidence with every single sit. I was providing food for the household I now shared with Chance, and his daughter. I was unknowingly becoming a role model for that little girl who wanted to do all the things that I was doing. Sitting in silence in the woods gave me that time I needed to heal and come to terms with all that had happened. I needed the quiet, and hunting gave me that. It gave me perspective about many things. It gave me my life back. 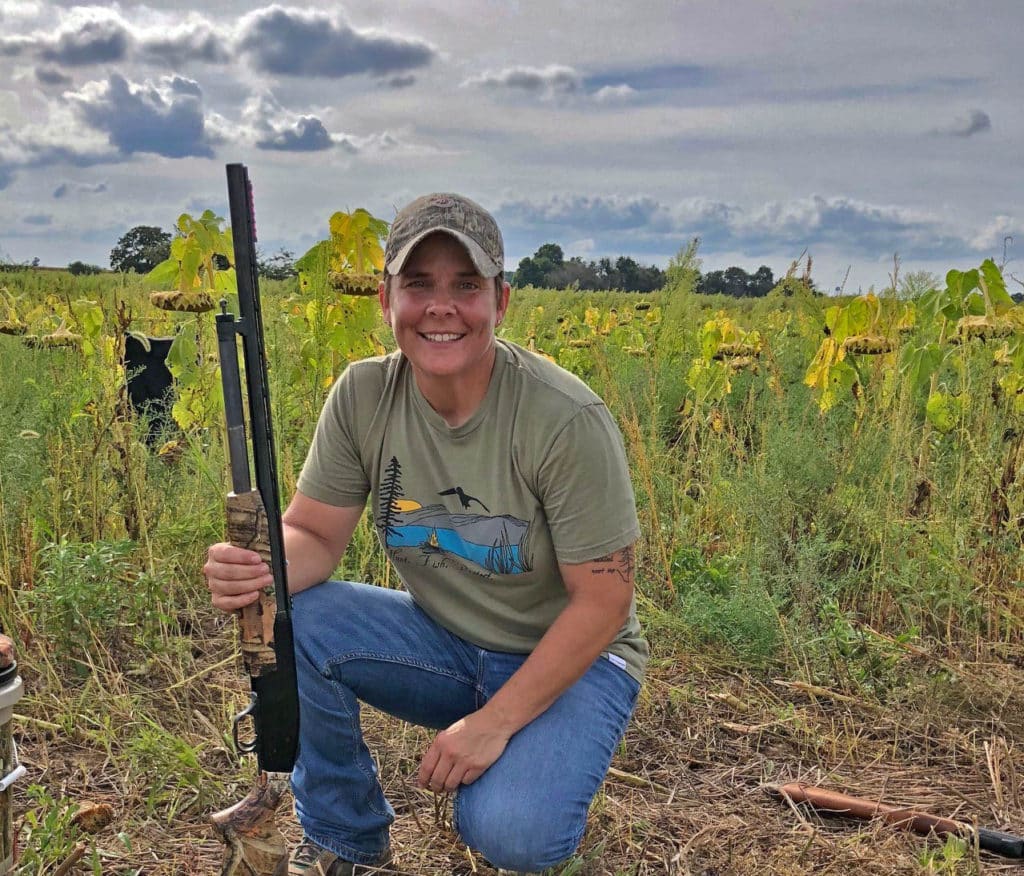 Cindy on a dove hunt

Back To My “Dream Hunt”

In 2018, I had an outstanding year with regards to all things hunting. I was able to put what is still, in my mind, an unbelievable stalk on a bedded Mule Deer in Wyoming. The stalk took almost two hours before I got within range and he finally stood up. I drove solo to Bozeman Montana, and then up into the Crazy Mountains, to camp, hunt and bond with seventeen other women whom I had never met, I successfully hunted the family farm of Doug Duren (contributor to MeatEater) for my first ever turkey. And, I became an Indiana Hunter Education instructor. But even with all of that, nothing topped what I was able to be a part of on December 30th. 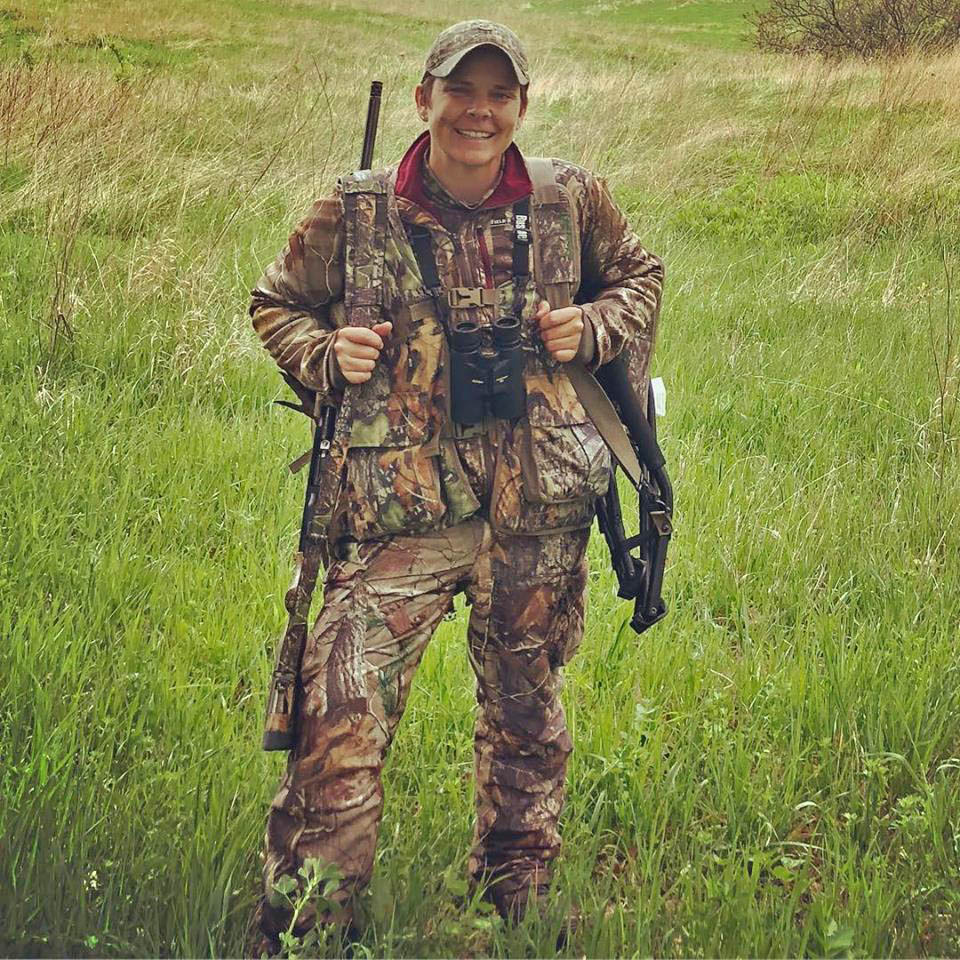 Cindy on a turkey hunt

I had recently learned from my dad that when he was a kid, and up into his early twenties, he was an avid small game hunter. I couldn’t believe that after all these years, and how close my dad and I were, that I never knew this about him. He only quit hunting after he took my oldest brother Tim, who was five or six at the time, out hunting one morning and Tim broke down because my dad was going to kill a rabbit. My dad said he couldn’t lie to my brother about continuing to hunt, so he just quit. My dad had given up something that meant more than anything to him, well almost anything. So, when I learned that squirrel hunting was his favorite animal to hunt, I got the idea to invite him down to our house and go squirrel hunting. He wasn’t sure about this idea, but after some prodding from my stepmom he agreed.

My dad, who is seventy-eight years old, arrived that Sunday morning with his trusty .22 that he bought at a gun auction when he was just eighteen years old. The gun was in almost pristine condition, and I learned soon enough, still accurate. We put some shots on paper to be sure and then headed for the woods. I stayed close to my dad just to be there if he stumbled or took a bad step. I watched him look up into the trees and I listened to the tips he offered about where the squirrels like to hide and what trees are their favorites.

There weren’t a lot of squirrels stirring that morning, but we did tag team one about an hour into our hunt. We found a log to sit down on to rest and chat while we waited for some more critters to present themselves. Dad talked about his adventures as a young man and how so many things have changed since that time. A big one was how just about anyone would let you hunt their ground back then, which is not the case today. He told me about meeting up with his buddy every night after work so they could get a game plan for their hunt the next day. My dad really lived for this.

It was approaching noon and we hadn’t see any new squirrels so we met up with Chance and headed back to the house. Dad started packing up for the return to Crawfordsville. As he packed he told me that I better keep the squirrel with me. After all, he might get in some trouble if he took the squirrel home with him.

People often describe their dream hunt as one chasing Caribou in Alaska, or Moose in Montana, or of course, Elk in Colorado. But when people ask me what my dream hunt is, there will be no hesitation when I answer them, because I have already been on my dream hunt. A day hunting squirrels with my dad, a few miles from the house on a chilly day in late December. It took over fifty years for my dad to get back into the woods to hunt, and he was able to finally go hunting with one of his children. I don’t know what it truly meant to my dad, but there will never be a hunt of any kind, anywhere, that will top this one, with my dad. 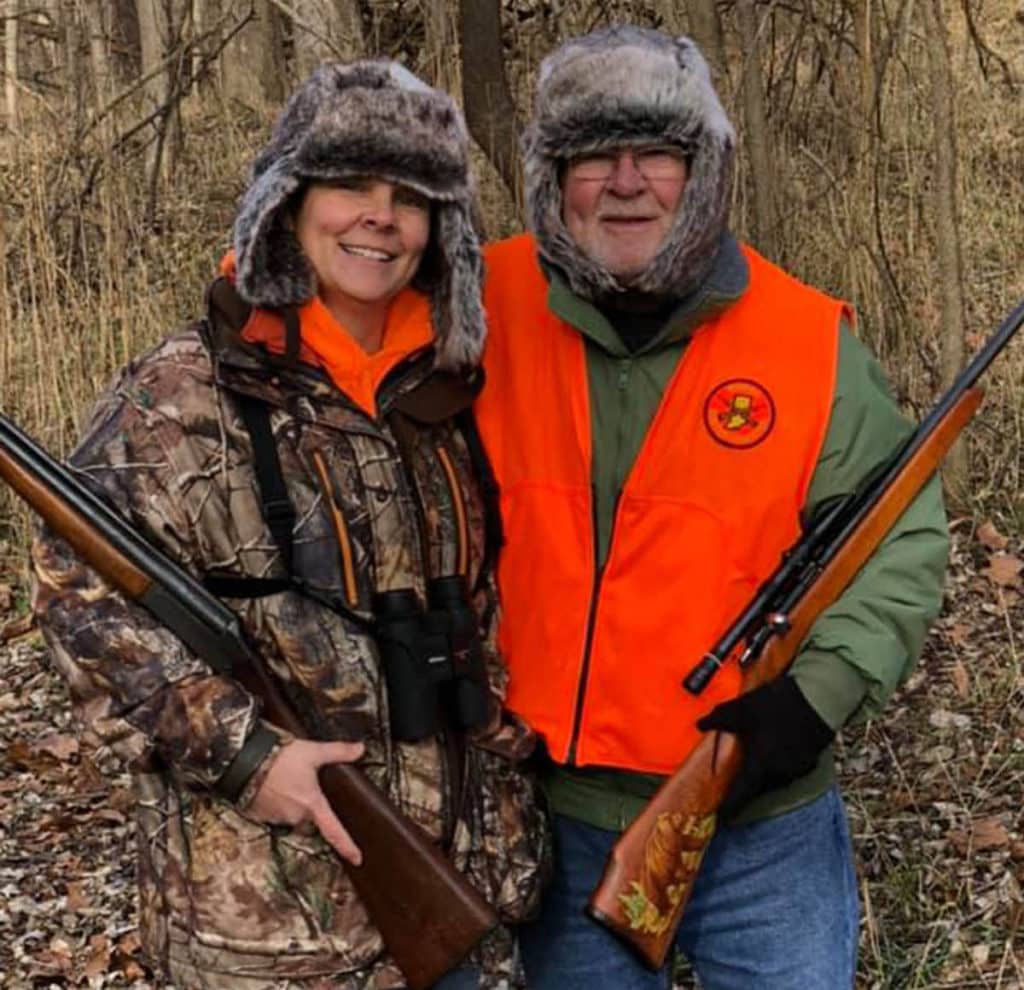 Cindy and her dad squirrel hunting

Editor’s Note: If you’re curious about starting your own hunting journey shoot an email to info@modcarn.com.

This content is funded in part through a grant provided by the Minnesota DNR. Learn more about DNR efforts to recruit, retain and reactivate hunters on their website.