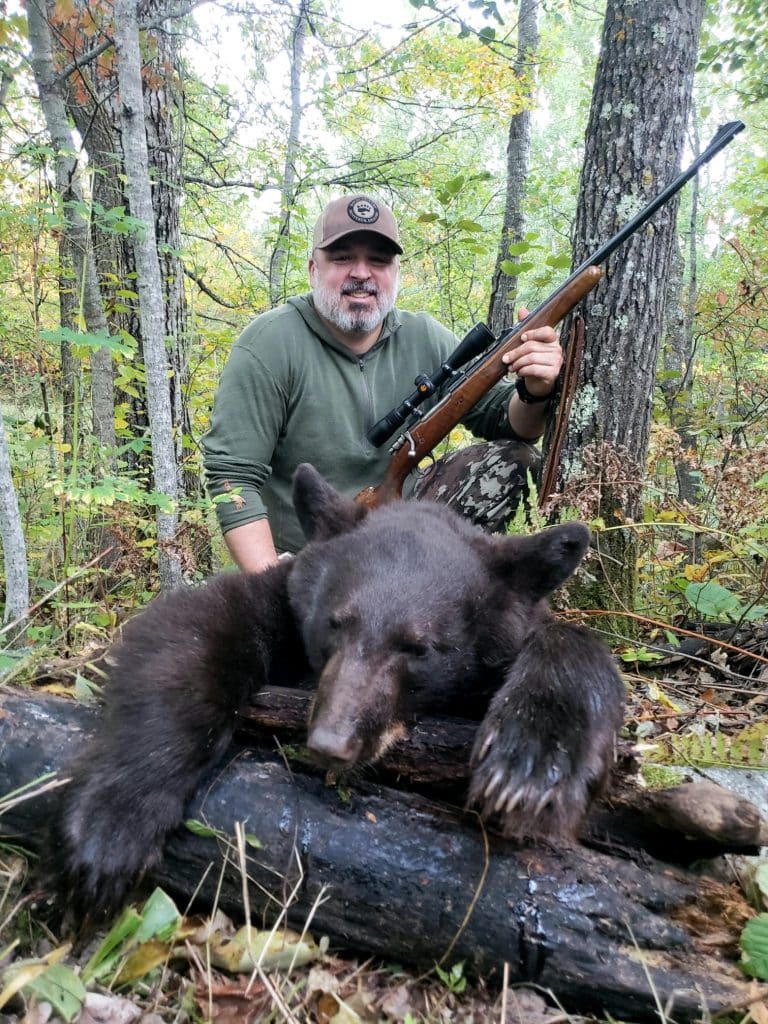 I never pictured myself as a bear hunter. When I was younger, I was told by my father that bear was greasy and stringy and wasn’t any good to eat. He also told me that killing something just to hang a rug on the wall isn’t what we did. So, over the years the idea of hunting bear never occurred to me.

Part of the delay was that it took me 6 years to draw a tag for the area I wanted to hunt. I have some wonderful friends that live up near Walker, Minnesota and they have plenty of bear hunting experience. My buddy Bryan Frana and his family have all hunted bears for years. His parents Dave and Jackie have a place on a piece of property in the area. Dave has been hunting bears for nearly 30 years. So, when he told me he would help if I drew a tag, I knew I was in good hands.

The first bears we started seeing on camera seemed to come in right away. Dave told me that it is typical to get a few bears in and then a more dominant bear will usually lay claim to the site. Eventually, that is what happened and we had what appeared to be a very large bear coming in regularly. Dave also told me that when the acorns start dropping off the bears usually abandon the site for natural forage. That happened as well, and for a couple long weeks we saw no bears. 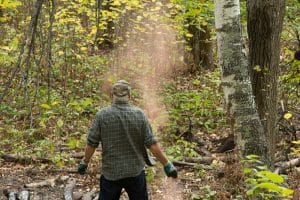 During this time Dave set up a second site just in case and we started seeing bears on that site as well. The first weekend I went up to hunt I was very interested in the site we had seen the large bear on. I sat in that stand the first afternoon and did not see a bear. I was visited by a deer and had an owl drop by but no sign of a bear.

When I got home that night, I was shown some pictures from the second site that had some bear on it in the middle of the afternoon. I decided to go hang a stand on the second sight and I would sit there the following day. The second day was quiet, and I ended up spending 7 hours in a tree and not seeing anything. 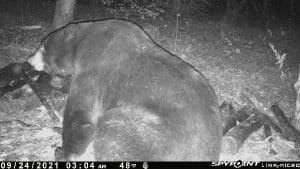 The following weekend I went back up and had decided to head back out to the first site. This is where we had seen the bigger bear. The night before that bear had come in just before sunset and it seemed to be my best option. I got out there early in the day and had made up my mind that I was going to sit out there until well after dark. Around 4:30 in the afternoon, I heard some movement off in the distance and then shortly after heard voices.

I couldn’t believe what I saw in front of me. Six ladies out for a nature hike had taken a wrong turn and were now walking right through my bear site. I poked my head out the window of my stand and informed them they were on private property. They apologized and headed back the direction they came. I sat the rest of the evening without seeing or hearing anything. I sat until 8:00pm that evening and then I headed for home. At 8:19 that evening, well after legal shooting hours, that big old bear came in. After that evening, he never came back to the bait site until well after dark.

Thinking that the bear site was probably blown, I decided to head out to the second site the following day. We had seen bears on that site at all hours of the day, so I went out early. Around 5:30 that evening I saw my first bear of the hunt. It was a small jet-black bear that strolled casually into the site and started eating. After a few minutes it calmly walked off over the hill and I never saw it again. 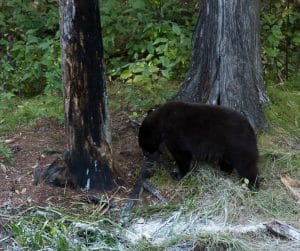 About fifteen minutes later, two more bears walked in and started moving things around. I sat and watched as these two ate and argued over who got to eat what. At one point the smaller of the two bears grabbed at an orange on the bait pile and the bigger bear smacked it in the face grabbed the orange and walked off. About 30 yards to my right, I heard a crash and a grunt. Both bears on the site took off and then all was quiet again. Ten minutes or so went by and the two bears returned and started eating again. Now about 10 yards to my right there was another crash and grunt and the two bears ran off again. At this point I could see the under brush moving and another bear was coming into my site. 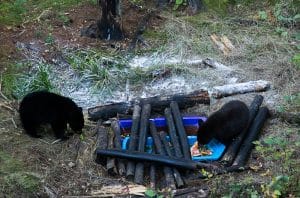 When the bear emerged into the opening, I could see that he was bigger than the other bears I had seen thus far. I hadn’t made up my mind if I was going to shoot this bear or not. I watched him for about 15 minutes. He was moving the logs around and at one point stood right over one of the logs that was about 4 and half feet long. Seeing that I started to think about how many more opportunities I might get. There was an old saying playing though my head. Don’t pass up the first day, what you would gladly take on your last day. I made the decision, lined up my shot and dropped the bear right where it stood.

I could see my bear laying on the ground and it was clearly not moving but something else was playing in my head. Dave had told me to take a few minutes before you get up and go look at the bear. Not because the bear might still be alive but because my adrenaline would be so high that my legs might not work. He wasn’t wrong. I have not had that kind of feeling about shooting an animal ever. I was happy and sad at the same time. Mostly, I was disappointed that my hunt was over.

Then the second guessing came in. Did I take the right bear, should I have waited for a bigger bear? What about that big fellow at the other site? I had several feelings that I didn’t really know what to do with. Even in the week following the hunt I still had some of those feelings of doubt. Slowly that has gone away and the more I do with this bear the better I feel. I rendered fat and have made soap, beard oil and toffee with the rendered fat. I have also made bear fat buttermilk biscuits. So far, the only thing I have eaten was the heart. 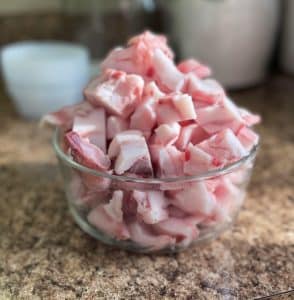 Overall, my bear hunting experience was a very positive one. I learned a lot about sitting in the woods alone for long periods and found out that I really enjoy it. Having a comfortable stand certainly helps. Taking naps up in a tree can be done if you have a comfortable stand.

I also learned that having the right people around you is very important. None of this would have been possible without the Frana family and their guidance and support. Hopefully we will be able to do it again. 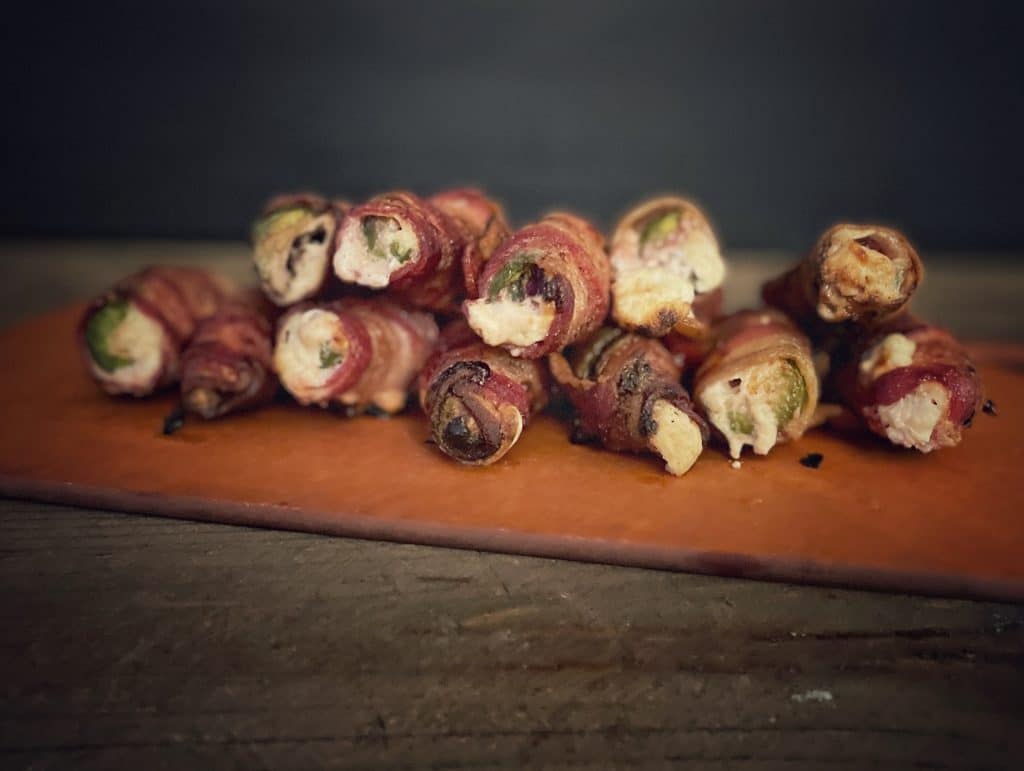 Usually, the first part of an animal I eat is the heart. I had recently seen a recipe for heart poppers. Bears are notorious for carrying trichinosis, which can be transferred to humans through eating undercooked meat. So, this popper recipe seemed like a good fit.

1 bear heart, trimmed of all fat and cut into strips

6 Jalapeno peppers, cut in half and seeds removed

Season the bear heart strips with salt and pepper or your favorite seasoning blend. I like the Trager Big Game rub.

Fill each jalapeno half with cream cheese and then place a seasoned strip of heart on each half. Wrap the filled jalapeno halves with a piece of bacon.

If you have a smoker set the temp to 375 degrees and smoke the poppers until the bacon is cooked and the internal temp of the bear strips reaches 165 degrees. If you don’t have a smoker you can do the same thing in the oven.  Let the cool and then enjoy the delicious tastes that bear meat has to offer.

Try some other great recipes from Modern Carnivore!