I used to live in a house in Rochester, MN with a large walnut tree in the backyard. Over the years that I lived there I grew to despise that damn tree and all of green golf ball sized nuts it would drop. My yard was full of the them and the squirrels would gather them and hoard them in my garage. I remember paying the neighbor kids to pick them up for me. I always wondered if there was a use for them that would make it worth while for someone to have a Walnut tree.

A few years after I moved out of that house I was introduced to Nocino. It’s a thick black liqueur made from unripe walnuts. I have tried several different kinds of homemade and store bought Nocino and have never really developed a taste for it. I have seen recipes for walnut ketchup and other recipes that use walnuts. the problem is that none of them seem worth all the hassle of collecting and processing the walnuts.

Walnuts are notoriously hard to process. First there is the husk, the hard green outer skin that protects the nut inside. If you wait until the husk is soft enough to peel off easily the whole nut can go bad. And, if you want to cut it off it will take time. Then there is cracking the shell and removing the meat. All of this after drying or roasting the nuts. It all seemed like too much effort for too little reward.

Then I came across a recipe for walnut bitters. I have come to love bitters and use them all the time in cocktails. I have also been trying to figure out how to incorporate more wild ingredients into my cocktails. This seemed like a good fit. After all, I only needed 1 cup of walnuts to make 2 1/2 cups of bitters.

I was originally going to head out to one of my favorite squirrel spots to gather up the walnuts but was worried I might not get enough as the squirrels had been collecting them for some time. Instead I called a friend of mine who has a walnut tree in his yard and asked him to gather up a 1 gallon ice cream pail full of the nuts that had fallen into his grass. After getting them I let them sit for about a week then started cutting away the green husk. This is something you really want to do outside as it is messy as hell. Inside the husk turns black and stains everything it touches. After removing the husk I put all the nuts in a five gallon bucket and sprayed them with a pressure washer. this removed almost all of the black stuff and got me down to the nut.

If you really wanted to at this point you could dry the nuts for 6 months before using them. I wanted them quicker than that so I spread them on a cooking sheet and roasted them for about 3 hours at 250 degrees. Then the real fun began. Cracking all the shells and pulling the meat out of the shells can be a daunting task. This was probably the longest step of the harvesting process. When I was done I ended up with just under a cup of walnuts. So, I added some store-bought walnuts (English Walnuts) to what I had shelled. This gave me the opportunity to have a side by side comparison. The black walnuts had a far better taste.  I was actually shocked at how much better the wild black walnuts tasted when compared to the store-bought version.

Once processed the nuts went into the bourbon to make the bitters. Making bitters is a slow process as well and it might seem like a lot of work, but I assure you the amount of bitters you will get out of this and the quality of the bitters will be far superior to anything you can get at the store. 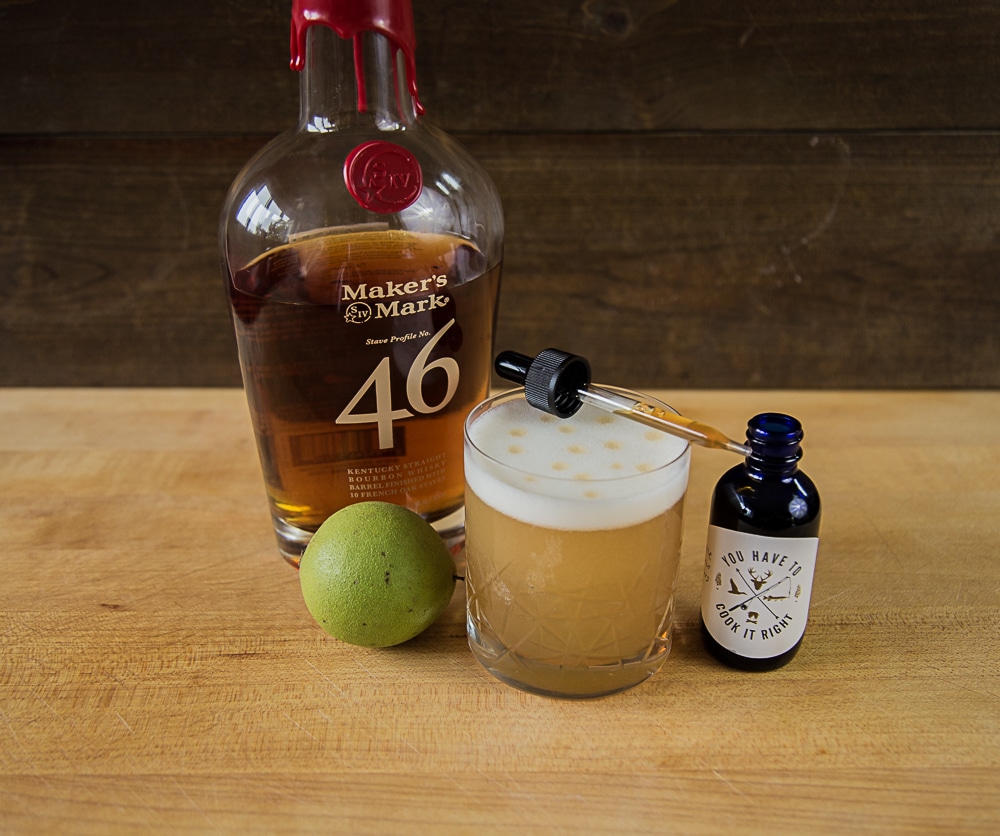 2 cups high-proof bourbon, minimum 100 proof. I use Uncle Nearest as it’s filtered through charred maple and then aged in oak which gives it a sightly maple flavor.

Place all of the ingredients, except the bourbon, water and maple sugar in a quart-sized mason jar or other large glass container with a lid. Add bourbon, seal the jar and store at room temperature out of direct sunlight for 2 weeks, shaking the jar daily.

After 2 weeks, strain the liquid through a cheesecloth-lined funnel into another large jar. Transfer solids to a small saucepan.

Add the water to the saucepan and bring to a boil. Cover saucepan, lower heat and simmer for 10 minutes. Let mixture cool completely, then add mixture to the original mason jar.

After 1 week, strain the jar with the liquid and the solids through a cheesecloth-lined funnel set over the jar containing the bourbon. Add the maple sugar to the jar and stir to combine, then cover and shake well.

Store at room temperature for 3 days, then uncover jar, skim surface of any debris and pass through a cheesecloth one last time. Using a funnel, portion bitters into smaller jars and label.

The bitters will taste their best if used within 1 year. Enjoy!