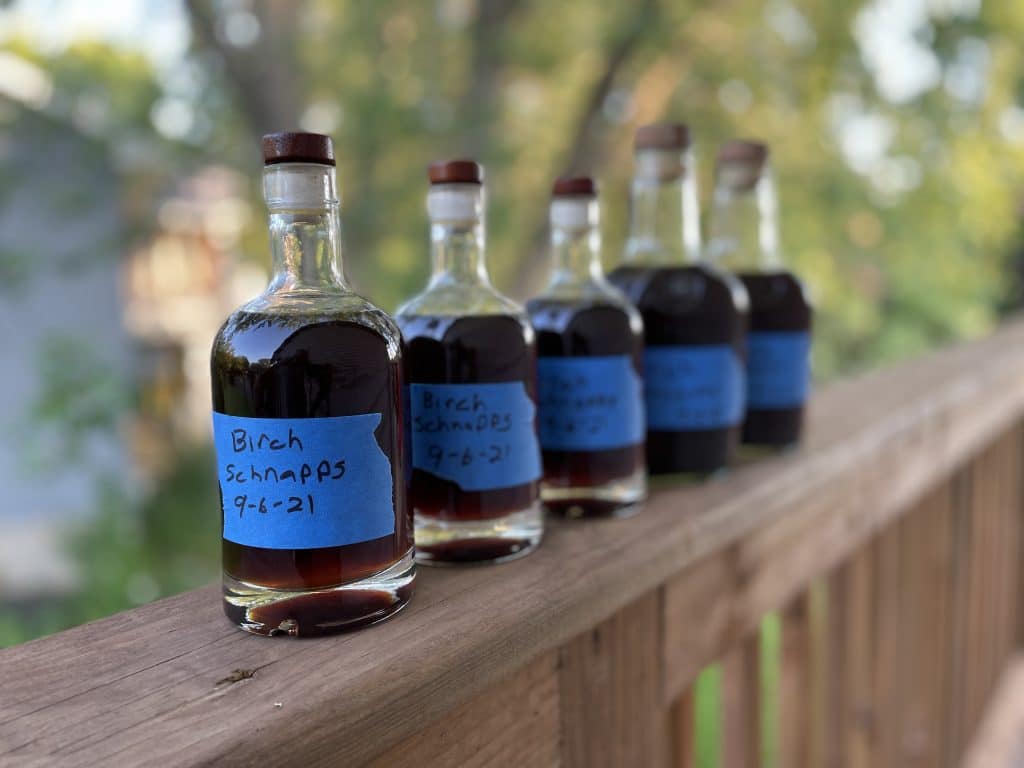 When I was younger I was fascinated by birch trees. I had read that Native Americans made their canoes from the birch bark. Birch bark has also has medicinal properties.  I was completely unaware that there were so many different varieties of birch when I was young. Here in Minnesota, we have 4 four different varieties of birch tree. The only one I knew was the white paper birch. We would always use the outer bark to start fires because it burns so well.

It wasn’t until just a few years ago that I read about birch being edible. I had heard about birch syrup and had even seen birch soda. I was unaware that other parts of the birch were edible and usable. Birch Tea can be made from the leaves and twigs. The small green seed pods that grow on birch trees and the bark are also usable. I started to think about what I could do with them.  Last year, I used the birch leaves to make birch bitters and I used them in various cocktails.

This spring some friends of mine tapped birch trees and made birch syrup. I was fortunate enough to get about a quart of birch syrup from them. The syrup has a very interesting flavor. It reminds me of a combination of maple syrup mixed with molasses. I really wanted to use that birch syrup in a way that would extend it because I didn’t have very much. The birch bitters had been a success in the past, so I thought I’d try making some birch schnapps.

After doing a little research I found a couple of varieties of birch schnapps on the market, but I can’t get them here in Minnesota. There’s an Icelandic version called Birkir but I’ve been unable to find anyone that can get it to me. So, I thought I would try making it myself. To make this schnapps I took elements from my birch bitters recipe and another old family recipe of ours called Glug. 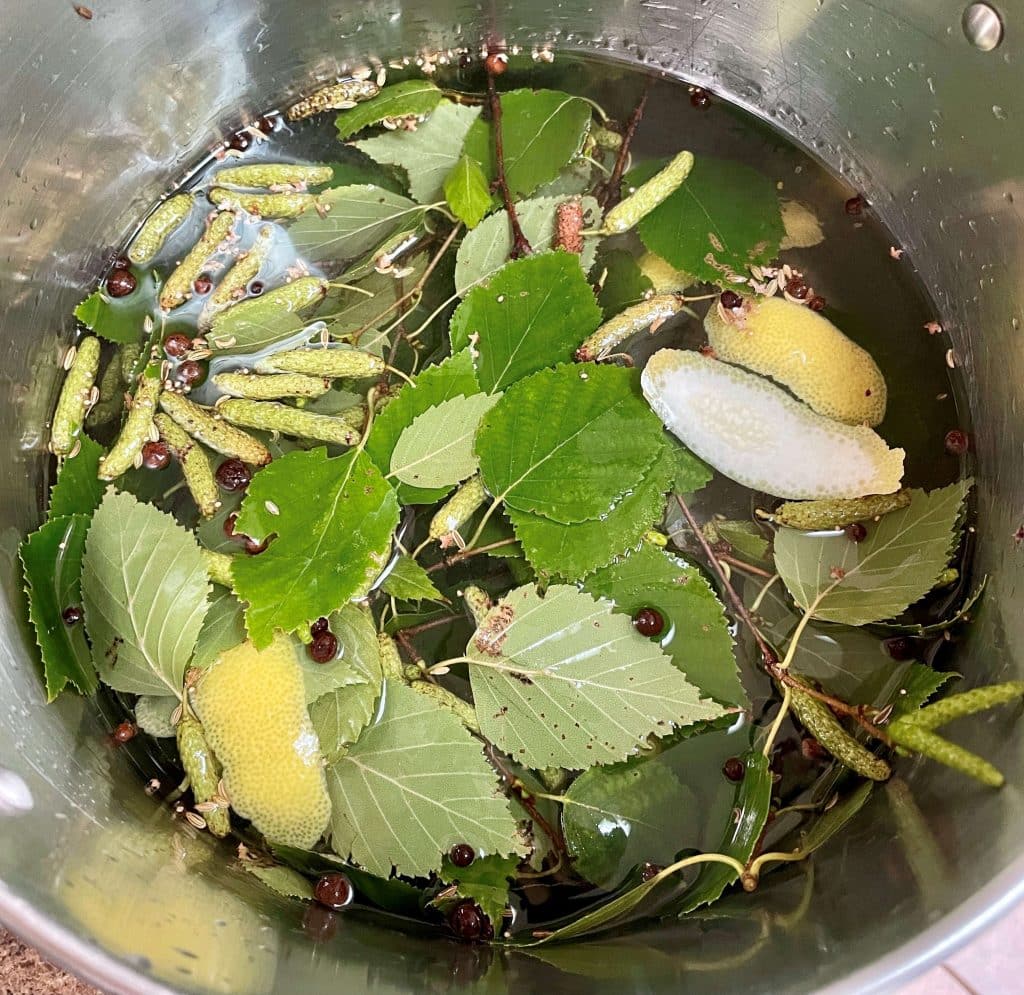 For the birch schnapps, I took the 190 proof Everclear, distilled water, cardamom, clove, fennel seed, lemon peel and then the leaves, branches, and green pods off the birch tree and boiled that all together. I added a little bit of regular sugar and then a cup and a half of the birch syrup.

I understand this recipe is probably very difficult for many people to make because of the scarcity of birch syrup. However, there is a place online called, The Gateway Farm, where you can order birch syrup. If you do get adventurous and want to make your own birch syrup, you’ll have to wait until next March when the birch sap starts flowing again. Hopefully, somebody will try this and let me know what they think. 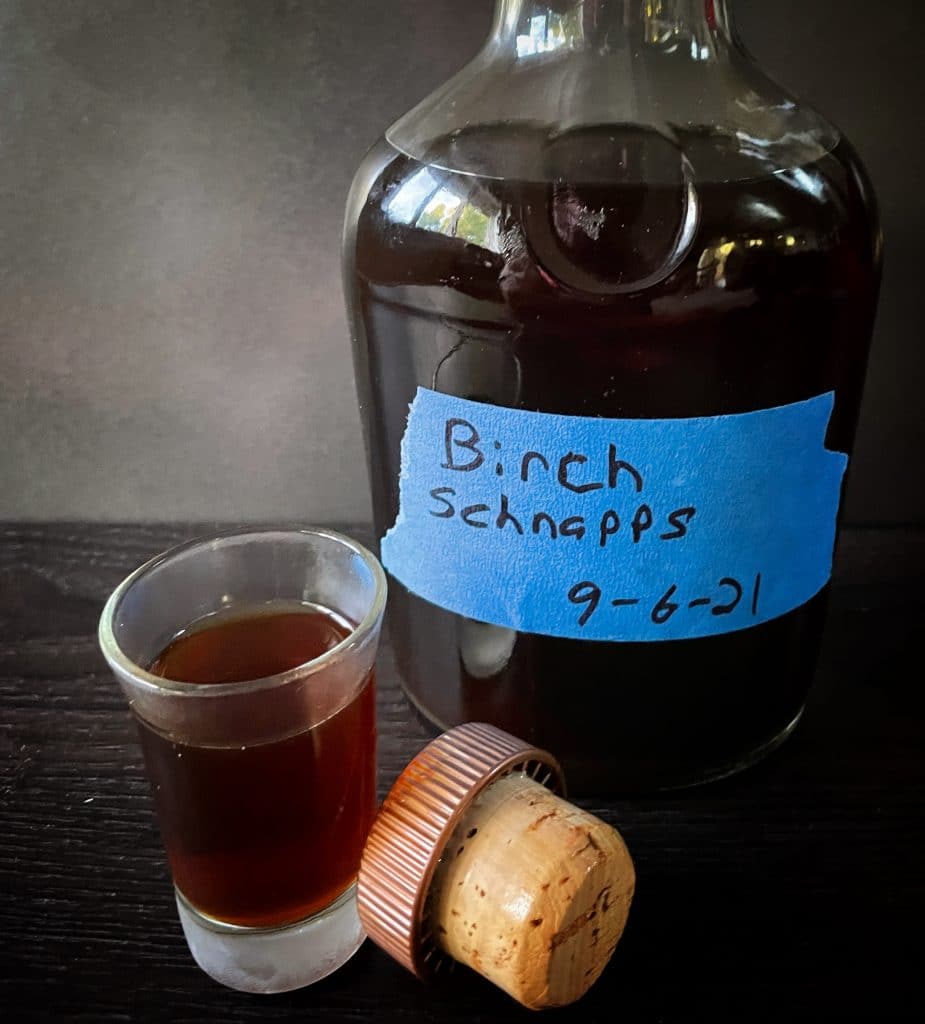 Zest from one lemon, cut into large strips

Combine all the ingredients in a large pot. Stir until the sugar dissolves and then place over medium heat with the cover on. It might be best if you do this outside as you are going to be boiling Everclear. Once you start seeing steam puff out the sides of the lid, turn the heat off.

This next part is optional but I have found that it makes for a smoother drink. While the Schnapps is still hot right after you turn the heat off. Remove the lids and light the steam on fire with a long handle lighter. It will erupt and a large flame with shoot up. Let it burn for a couple seconds then put the lid back on to kill the flame. Let sit until cool then bottle up and enjoy.