(Editor’s Note: In the winter activity of darkhouse spearing the decoy is arguably one of the most important tools. This post on the Bru-ell spearing decoy is part of the Hardwater Hunters series by Modern Carnivore. Look for other posts in this series by clicking on this link.)

Staring into the Dark Water

I had been staring at the same six square feet of lake bottom for almost eight hours.  We had sawed a large rectangular hole through 13 inches of ice the afternoon before, and placed my well-worn darkhouse atop the hole.  This was after we hauled this gear two miles out onto a frozen lake in northern Minnesota. This particular lake was a four hour drive away and accessible only through a rugged forest service boat launch.

The thought of all the effort it took to set up my house and that of five other friends and family members loomed large as the sun started to slip below the pines.  I imagined a giant funnel where our GPS, auger, ice saws, chisels, darkhouse, shovels, tongs, spears, and line all went in the top, and at the bottom came out a small, delicate, wooden decoy.  This decoy, after all, was all that the fish could see.  By my thinking, it was all that mattered.  And our collective hopes of spearing a few Northern Pike depended nearly entirely on these suspended decoys to lure them to our infinitesimally small portion of lake.

Most fish decoys are carved from wood and made to resemble a fish.  A small cavity at the bottom is filled  with lead so the decoy will sink.  The fins are typically metal and the paint job can be anything from hyper-realistic to a simple one-tone.  This particular decoy body is then painted a basic red and white pattern.  Some small sheet metal fins, a small eye-hook at the balance point, and push-pin eyes complete the decoy.

Crafted from these very basic components, A Bru-ell Decoy is a masterpiece at the intersection of design and folk art.

The Bru-ell spearing decoy name stems from the original makers- Bruce and Helen Wakefield of Watkins, Minnesota.  According to the company website, a tree fell on Bruce and he could no longer complete the chores on his mink and cattle farm.  Bruce decided to start making fish decoys and had a good deal of success.  Since his decision, thousands of Bru-ell decoys, ranging from 3-14 inches in length, have lured Northern Pike in on an untold number of lakes. 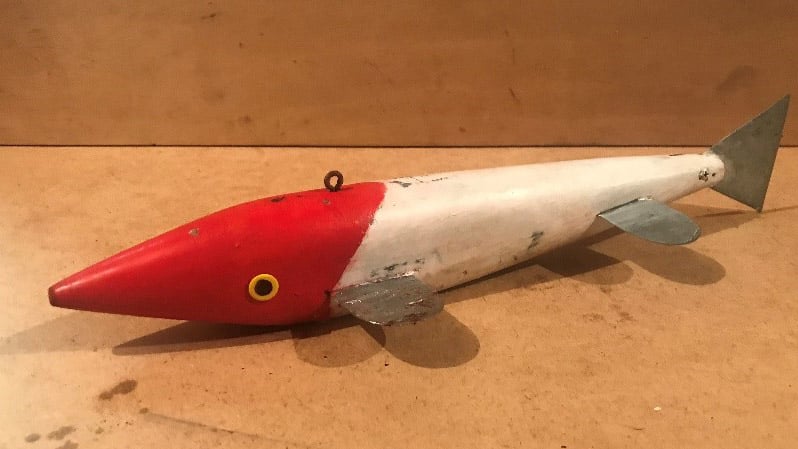 Like a lot of the best spearing gear, one can’t just go out and buy one of these Bru-ell spearing decoys at the sporting goods store.  You can still find smaller Bru-ells, but I’ve never found those to work as well as the large red and white ones.  The fact that they are now out of production only adds to their mystique.  My dad makes it a habit of asking every bait shop we’ve ever stopped at if they have any old Bru-ells sitting in storage.  We’ve made a lot of repairs to ours over the years, replacing eyes and fins.

I can’t explain how, but these things just work.  I’ve lured in hundreds of Northerns with my Bru-ell. I’ve taken many from the lake at the end of my spear, but I’ve let far more just swim through the hole untouched.  The fish I did spear became fillets for fish fries, y-bone trimmings for pickled fish, and skins to add to our dog food.  Despite having seen it happen hundreds of times, every fish that shows interest or “decoys” (as the old-timers say), gives me a huge rush.

The rush is magnified proportional to the size of the fish.

…Back to Staring Into the Dark Water

It took everything I had to remain calm, as, I could barely see through the low light, a massive head slowly rising toward my decoy.  I made a slow deliberate move, practiced hundreds of times to pass the time between fish sightings, for my spear.  I took the grip near the balance point, and eased the full length of all seven tines gently into the water. I drew the slack of the rope in my left, to guard against any snags.

As I aimed and prepared my shot, the fish darted out of the hole.

I waited a few seconds, as I’ve seen fish circle back to investigate. Nothing.

I began to make peace with the fact that I missed my chance.  I have been spearing for over 25 years, and this was the biggest fish I’d ever seen.  As a last ditch effort, I did a gentle swim of my decoy away from the direction that the giant had departed, hoping to ignite its prey drive.  I knew that it was a long shot, as larger fish consume less food per pound than smaller fish.  And, those that live to this age don’t make it through numerous spearing seasons by being overly curious with lures and decoys.  But, I’d done this move a handful of times on smaller fish and seen it work.  I figured it was worth a shot.

As I held the decoy at the far end of the hole, the fish again approached.  I let the spear go as soon as I had a clean, ethical shot.

As I wrestled the fish out of the water, bringing it from the domain it ruled as apex predator to mine, the fish became tangled in the decoy line.  As I reached for my knife to end the flailing, I made sure to secure my decoy. For I knew, my future chances of bagging a bigger fish were much greater than coming across another 14 inch Bru-ell. 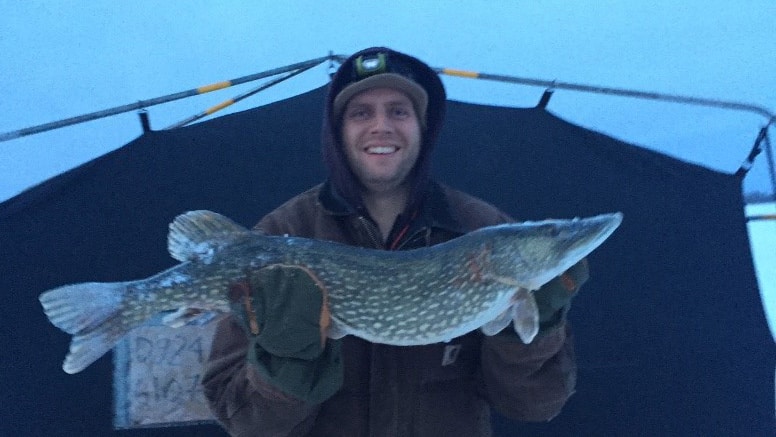