Part of the Hardwater Hunters Series by Modern Carnivore

Editor’s Note: This post on darkhouse spearfishing spears is part of the Hardwater Hunters series by Modern Carnivore. Look for other posts in this series by clicking on this link.)

In 1995, I was 13 years old.  At that time, my prized processions were my first CD, a No Fear t-shirt, a Brett Favre rookie card, and a hand-forged darkhouse spearfishing spear.  I’m 36 now, and despite my best efforts on Spotify, Hootie and the Blowfish haven’t reentered the Billboard charts, sleeve-cutting accelerated the complete disintegration of the t-shirt, and Brett Favre has repeatedly betrayed my loyalty.  But, the spear still functions perfectly and gets plenty of use.  It is as magnificent now, as it was when I first admired it in a Northern Minnesota bait shop over 20 years ago.

Family friends introduced my dad and me to darkhouse spearfishing in 1992.  On our fourth trip to Lake Winnibigoshish, my dad bought me my very own darkhouse spearfishing spear. This centerpiece of the sport was the first thing we bought of our own.  We didn’t have a lot of money then, but my Dad went all in, and purchased a “JJV” spear from Ben’s Bait in Grand Rapids, MN.  These spears were regarded as the best in the area, and for good reason. 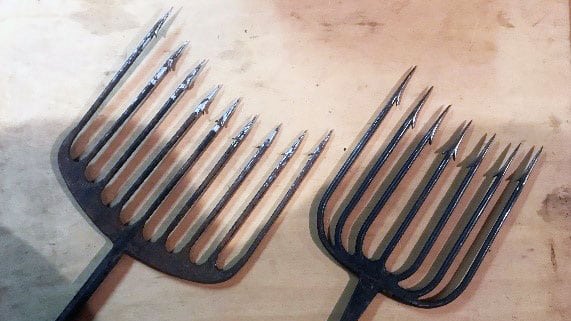 Like darkhouse spearfishing decoys, the spears of this sport are often crafted through traditional methods. My spear was hand-forged by James Vernig, a miner who was a self-taught blacksmith on the side.  Together with his son, Jim, they produced about eight to ten darkhouse spearfishing spears a year and sold them primarily in the Grand Rapids area.  The initials of their names are all taken together to form the three letters embossed on the head of the spear. 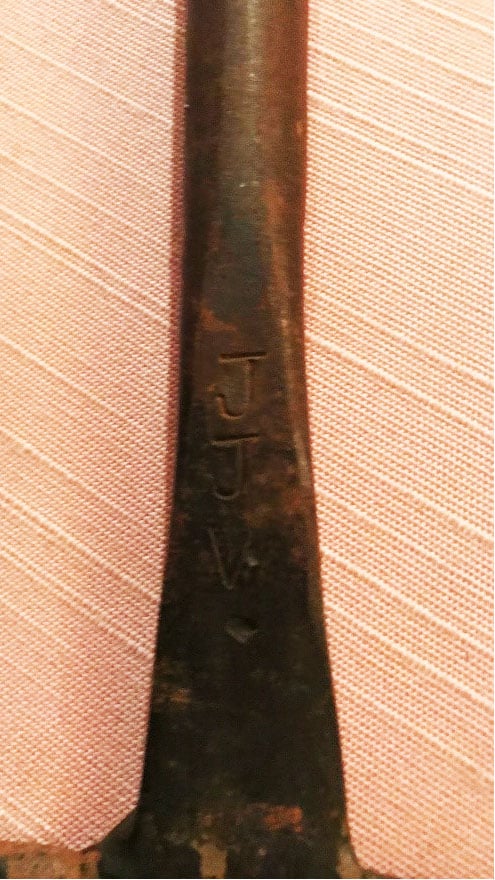 The maker’s mark of JJV can be seen on this spear.

Through social media, I was able to find Jim through his brother, and we spoke on the phone recently.  I was giddy to talk to him as JJV spears have a reputation bordering on legendary.  And, unlike many fishing stories, the reputation is ground in more fact than fiction.

Each spear took the Vernigs two to three days to complete, utilizing centuries-old tools and techniques. Using a forge, they heated spring steel stock until red hot.  They then shaped it with hammer and anvil to form the beard of each of the seven tines of the spear.  Some call this part of the spear a “barb,” as it holds the fish to the spear, just as a barb on a fishing hook.

Beards are the main way to differentiate between mass-production and artisan darkhouse spearfishing spears.  In mass production, the beards are typically chiseled out of a rod of steel (note the tines on the spear in the image featured at the top of this post which are chiseled).  Jim noted the difference stating, “chiseling greatly weakens the steel.”

This was the first of many times that Jim pointed out that they took a long time to make their spears because the quality was the most important thing to his dad.  He went as far to say that the quality of the spears is what he’s the most proud of.  Today, he’s still building his father’s original design at the same high level of craftsmanship.  I think his late father would be proud as well.  People from as far as Michigan and Alaska have come to Minnesota to purchase Vernig spears.  Toward the end of our conversation, I was thrilled to learn that Jim is teaching his son Kurt to make spears.  Kurt is using the same hammer, anvil, and tongs that his grandfather used for decades.  And, he will make masterfully forge and weld steel spears just like his father and grandfather before him. This continuity and unwavering quality of JJV spears has equipped generations of spearfishing enthusiasts to pass on the sport to friends and family. I look forward to continuing our tradition, and purchasing a JJV spear for my child when he is old enough to make his first trip up north.

I don’t think Hootie and Brett will receive the same reverence.

View all posts in the Hardwater Hunters series here.