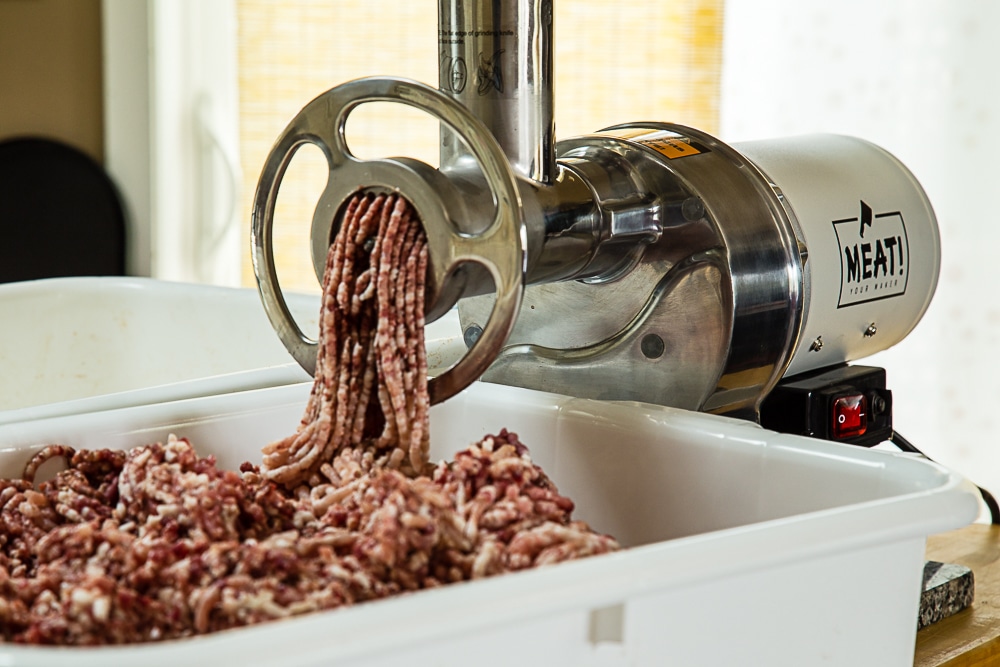 A good meat grinder is an essential part of making venison chorizo.

When I was a kid I hated making sausage. Every year my family would get together to make a traditional Swedish potato sausage. It was labor-intensive and the end result was always a little underwhelming. We used to make about 20 pounds every year using an old cast-iron hand-cranked grinder. The whole process would take us all-day and always seemed to be more hassle than it was worth.

The manual grinding was always the hardest part but I remember everyone being equally angry about having to mix all that meat by hand. The meat was always so cold that my dad’s hands would cramp up and he and my uncle would alternate. Each one would mix until his hands were on the verge of frostbite and then switch.

When I decided to start making my own sausages I remembered all the bad parts of making it when I was a kid. The first thing I had to get was an electric grinder. I had a KitchenAid® mixer so I bought the grinder attachment for it. It made life so much easier. This is where I started, and then over the years I have had several different grinders. 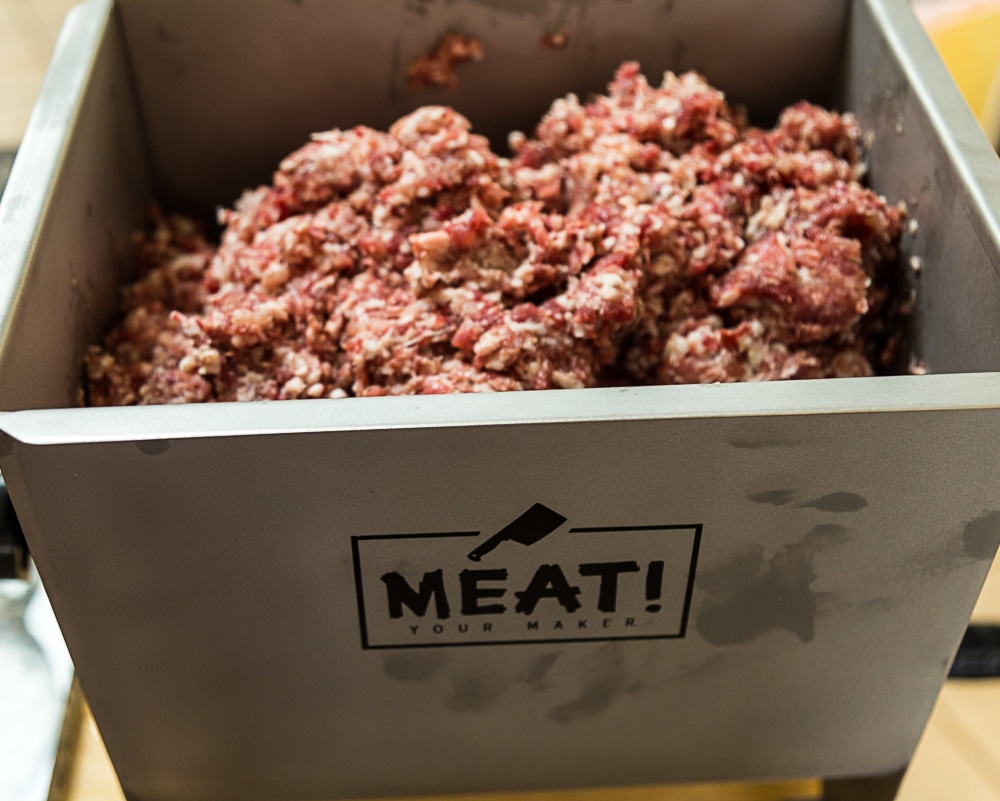 A meat mixer can be very helpful when making Venison Chorizo, but is not necessary if you’re just starting out.

The other piece of equipment that really changed things for me was the meat mixer. Instead of freezing my hands to the point of pain I can now dump all the ground meat into the mixer and let the paddles do all the work. My sausage-making process goes a lot smoother now and I can make larger batches in less time than when I was a kid.

Getting Started with Venison Chorizo

A good meat grinder and mixer are all you would really need to get started making your own sausages. If you were planning on making cased sausages a stuffer is a really nice thing to have but most grinders can be used as stuffers as well. The only issue you run into is over grinding the meat and breaking the bind that you get in the mixer.

If you are just getting into making sausages I would suggest making a sausage that can be used in bulk. In other words, sausages that don’t need to be cased. This would include breakfast sausage, Italian sausage, and Chorizo which are some of my favorites. I will usually make 10-pound batches of each and I try to have them on hand at all times.

Of the three, venison chorizo is by far my favorite. It is remarkably simple to make and insanely delicious. One of these years I’m going to make it down south to shoot a pig. I’ll then turn the whole damn thing into chorizo. I like venison chorizo so much that I have switched to using it instead of breakfast sausage in my biscuits and gravy.

One of my favorite things to make with the chorizo is called a Pambazo. Think of it as a sloppy joe only a thousand times better. You brown the venison chorizo and then mix it with roasted sweet potatoes. Then stuff the potato and venison chorizo mixture into a bolillo roll with queso fresco and a guajillo adobo sauce. Then dip the whole sandwich in the guajillo adobo and fry it in a skillet. Serve it up with some sour cream and a spicy green salsa. It is probably the best sandwich on the planet. 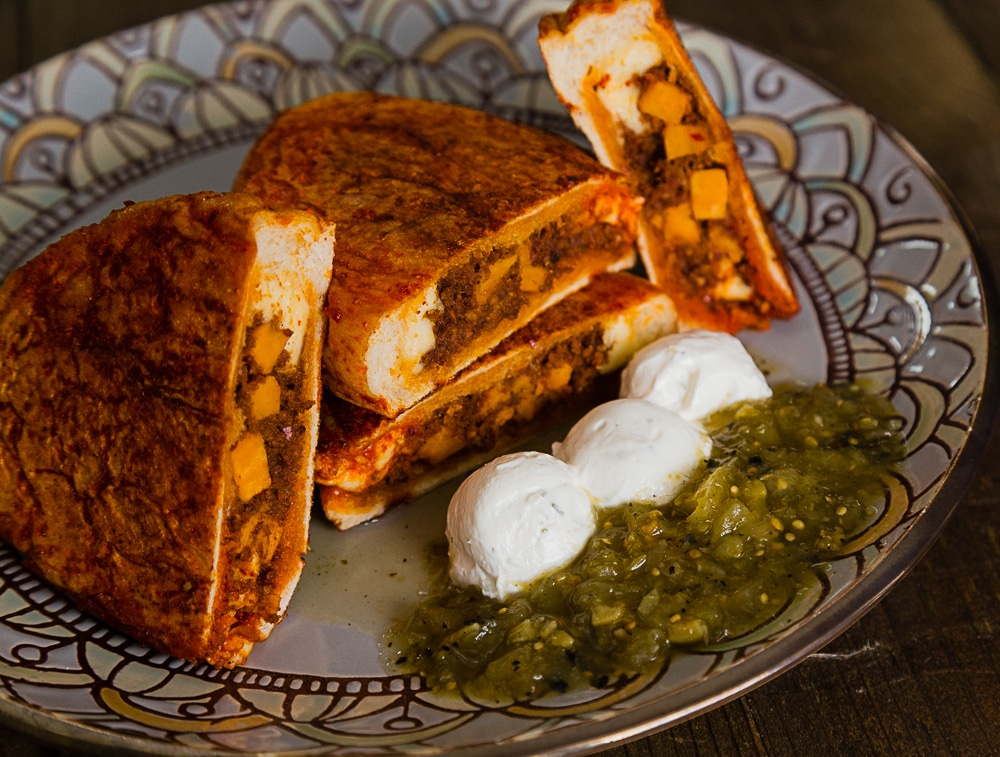 Pambazo sandwich made with Venison Chorizo.

Give this venison chorizo a try, I am sure it will become one of your favorites.

7.5 pounds of ground venison, cut into small enough pieces to fit in your grinder

2.5 pounds pork fat, cut into small enough pieces to fit in your grinder

Start by chilling all of your grinder parts in the freezer for about 20 minutes before you start your grind.

Combine all the ingredients together in a large tub and mix to make sure all the cubes of meat are covered in spices.

Using a medium grinding plate, grind the meat and spices through your grinder. When finished place the meat in the freezer for about 30 minutes to make sure the meat stays really cold.

Pass the meat through the grinder once more. When the meat has been double ground add the tequila and vinegar and mix until the liquids are fully absorbed into the meat and the sausage has started to bind together.

Divide the meat into one-pound portions and place it in freezer bags. I like to vacuum seal mine and then lay them flat for easier storage in the freezer.

* Modern Carnivore is a member of the Amazon Affiliates Program and may receive compensation for purchases made from links in this site which are clicked on by a user. This does not affect the cost of any purchases for the consumer.