Being the only woman there 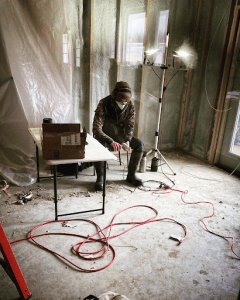 Darkhouse spearing, like most hunting and fishing endeavors in the United States, is overwhelmingly male.  During the 2020-21 spearing season, men bought 88% of darkhouse spearing licences in North Dakota.  The typical winner’s circle at decoy conventions could easily pass for a casting call for a Grumpy Old Men Netflix reboot.

Yet, in these male-dominated spaces, you’ll likely hear some well-deserved buzz about Great Day Decoys, Melissa’s company.  The word is out.  The waitlist for a decoy is well over a year, and some of her monthly auction sales have fetched prices that were “very surprising” to her.  But given her background and boundless enthusiasm, it should not be the least bit surprising that Melissa is a rising star in the decoy carving world.

Melissa was born about an hour south of the Twin Cities.  She grew up hunting and fishing with her father on 40 acres of CRP behind their rural home.  Her enthusiasm for the outdoors led her to earn a degree in Wildlife and Natural Resources Management from North Dakota State University.

In the winter of 2015, while working for U.S. Fish and Wildlife Service in the far Northwest part of the state, Melissa took part in an event called, “Becoming an Outdoors Woman” that was focused on darkhouse spearfishing.

She described the event:  “Growing up in Minnesota, I didn’t know that spearfishing was a thing, and I thought I knew it all because of all the hunting and fishing I did growing up.  It’s amazing, there’s just this giant hole in the ice, and it’s like looking at a picture frame. And, I just love being entertained by that big picture in the ice.”  The first day, Melissa didn’t see a pike.  But at that event, something else caught her eye: a Whittier decoy.

After seeing an incredible Whittier perch decoy at the “Becoming an Outdoorswoman” event, Melissa quickly ordered one of her own. 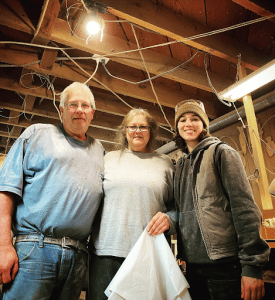 “When it first arrived, I was afraid to use it—it looked so nice.  I thought to myself, I don’t want to put this in the water, I’ll make one on my own instead.”  So, she scoured YouTube and, naturally, arrived at numerous Rick Whittier instructional videos on making decoys.

Melissa remembers this being a classic, “only woman there” moment.  Determined to learn more about decoy making, she stuck around after the class and talked at length with Rick.  She then set off to carve her first few decoys.  The first batch included four total decoys: two sunfish and two perch.

Fast forward to December of 2020, and, as luck would have it, Melissa applied to be an apprentice through a grant from North Dakota Council on the Arts and spent 80 hours working with Rick and his wife Connie in their decoy shop in Lidgerwood, North Dakota.  Melissa carved 20 total decoys with the Whittiers and credits them with a lot of her improvement as a carver and painter.  That same month, Melissa launched Great Day Decoys.  She’s now carved and sold over 90 total decoys. 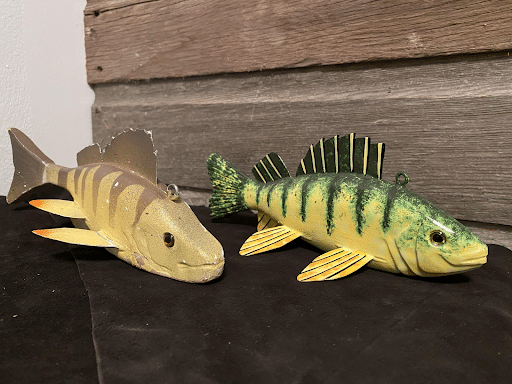 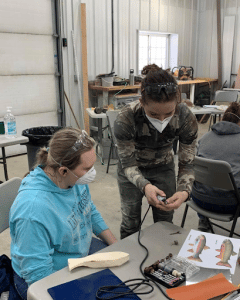 Melissa teaching during a carving class.

Melissa is determined to share the sport of darkhouse spearing and to teach the art of decoy making to more women.

In fact, Melissa now has her own class on decoy carving at the Wild Outdoor Women event, which, despite a title change, is the same event which piqued her interest in darkhouse spearing back in 2015.  This winter, ten lucky women are going to learn to carve, form, and decorate their decoys to use on the ice to spear Northern Pike.

I asked Melissa about her most memorable decoys.  She shared that the first four will always be special. She gave them to her family members and kept one for herself.  Also, she stated that she’d never forget hand painting her first brook trout decoy.  While painting the details onto the brook trout, she learned of her grandfather’s passing.  This brook trout never got shipped out, it sits on her mantle and reminds her of her grandfather.   Because of his love for the outdoors and woodworking, she named her company, Great Day Decoys, in his memory. 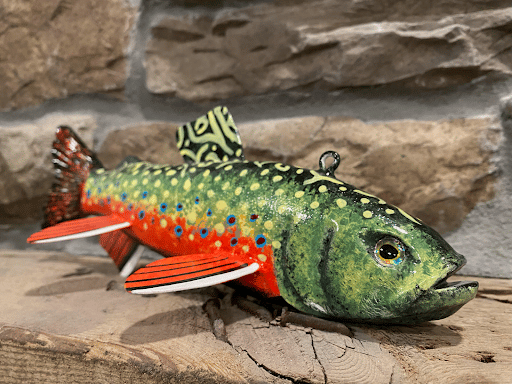 Melissa plans on making some more memories by entering her hand painted decoys into competitions for working decoys in 2022.  But, don’t expect to find her decoys in the “Woman Carvers” bracket.  She scoffs at the idea of not competing with the entire field.

If you would like to learn more about Melissa and Great Day Decoys you can visit their Facebook page.