It’s 1993 and ten year old me is terrified. I’m a mile from shore, standing firmly on six inches of “good ice” and my stomach is in my throat.  I am setting up a portable ice house for the first time and I can feel fear- an unfamiliar sensation in my suburban upbringing.  There is a four wheeler and a trailer sitting a few feet away, weighing hundreds of pounds each, but I am certain the ice is going to break under my next 100 pound (yes, I was a husky kid) footstep. Our family friend and host on my first spear fishing outing asks me to hand him the chisel, but I can’t move.  I am paralyzed by the sound of ice.

The sound comes and goes, but it’s always there, somewhere, waiting for me to get comfortable and forget about it.  Then it comes roaring back into my eardrums. I inch towards the chisel and pick it up.  My hand is trembling.  I know the sound of ice isn’t very loud but at the same time, it’s louder than any thunderstorm.  In my head I hear it louder than a tornado. I am trying to not wuss out in front of my grade school friend and our fathers, but I am a wuss.

The Sound of Ice

It’s the sound of ice.  Uniquely, water expands as it freezes making the noise.  The ice is constantly cracking, heaving, sliding, chipping, expanding, and frightening new-bees of outdoor winter adventures.  It’s the sound of good ice.  It means that the weather is cold and more ice is forming.  The sounds mean safety.  It’s a cruel trick on the human senses and our imagination. 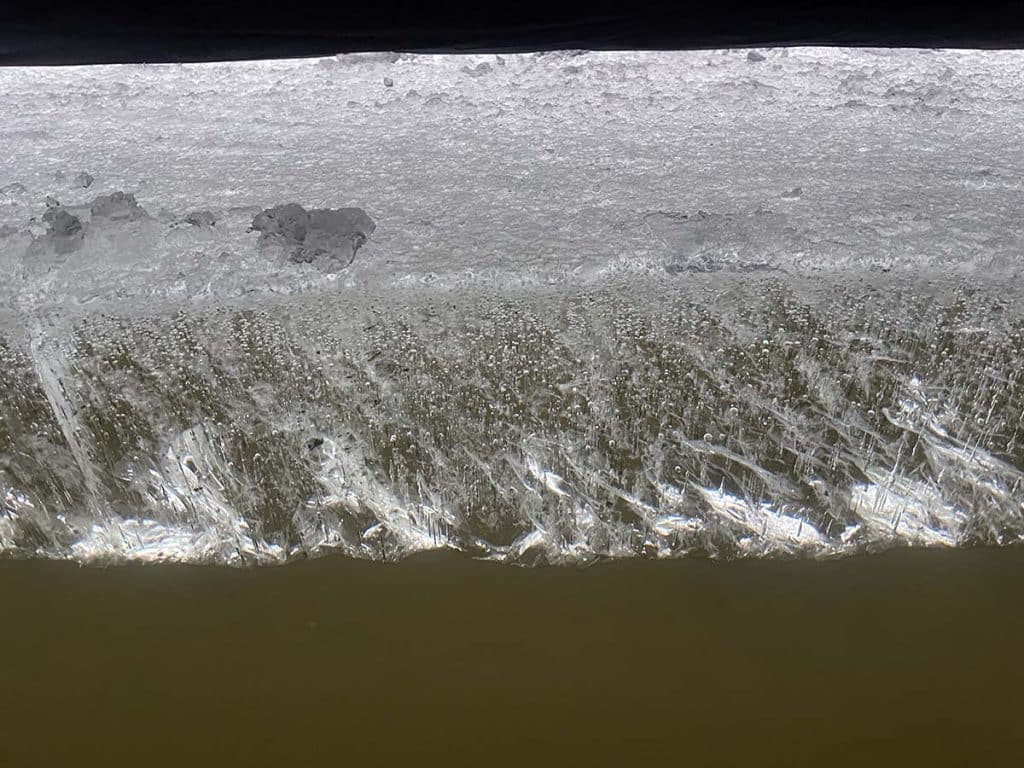 A cross-section of early season ice on a lake from inside a darkhouse spearing shack.

The sound of ice is powerful.  It’s the soundtrack of tens of thousands of years of the earth’s history. A millenia-old power ballad that collected and dragged mineral deposits across a continent to make our farmland fertile.  It’s the eight minute rock ballad that dragged enough ice to melt into entire lakes.

(If you’ve never heard ice creaking like this listen to this episode of the Modern Carnivore Podcast. At 1:20 you’ll hear the ice creaking and groaning.)

It’s the sound of human history.  Ice created the land bridge across the Bering Strait.  The first Americans traveled these ice corridors and down through our continent where they learned to harvest game of all sorts. Eventually, they perfected the art of spearing fresh fish through the ice.*

Those who will be dark house spearing through the ice this season will be listening to the same symphony.  The youngsters will tremble.  Their mentors will explain the normalcy.  Slowly, they’ll be soothed by the cacophony of the lake.  The song remains the same in the land of the ice and snow.**

Here’s to everyone who hears the ice calling over open water and highs temps in the 80s.  Here’s to those who will initiate others to the chorus of cracks, yelps, squeaks, and crystalline tensions.  Every year we are called back.  In the dead of winter, the lakes of the north are alive and their call is loud.

See you on the ice, very soon!

How to Make Smoked Whitefish

The sound of ice.

**I waited until paragraph six to make this double Led Zeppelin reference.  The Minnesota Vikings use it before the opening kick off at home games.  I’m proud of my restraint.

NOTE: Modern Carnivore is part of the Amazon Affiliate Program and may earn revenue for purchases made from links on this page to the Amazon store. This does not affect your purchase price.