This post was written by Andrew Clare with the North American Non-lead Partnership.

After a fruitful hunt, any old timer will tell you it is good practice to leave the inedible bits (the guts, the bones, the trim, and such) out for the scavengers. Depending on your state’s policies, you might even be able to catch a coyote on the pile! The more severe the weather becomes, that pile (referred to as offal) often acts as a scavenging animal’s lifeline- attracting bears, vultures, eagles, hawks, owls, mice, and other wildlife to an otherwise scarce meal. 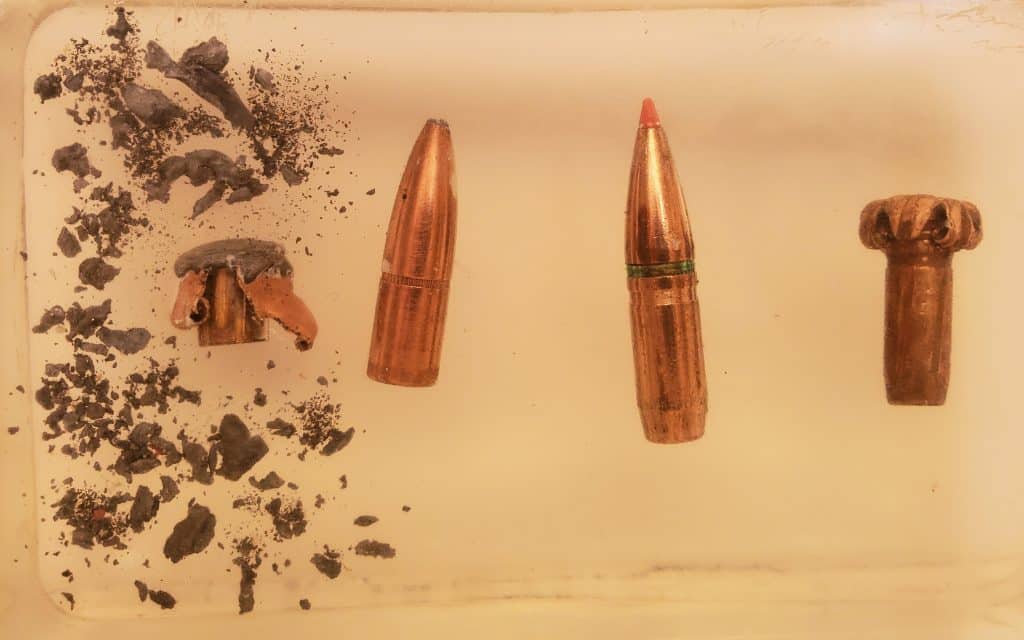 The fragmentation rates by lead (left) and non-lead (right) bullets shot from the same .30-06.

Those same old timers (and the basic tenets of hunter’s safety) also suggest that you own every shot you take. We now extend this responsibility from the muzzle to the target and beyond, both physically and across time. X-rays reveal that lead fragments are left behind in the body of game species after being shot with lead ammunition. The offal- which is provided by hunters or agriculturalists conducting pest control, if ingested, can cause lead poisoning and death. In fact, it is one of the leading causes of mortality for several raptor species like bald and golden eagles across the US.

Projectiles have been made from lead for hundreds of years. This is because of its natural density, malleability, low cost, and ease of mining. Lead was first identified as harmful to avian wildlife in the late 1800’s. The shot would end up in wetlands and was used as grit for digestion by waterfowl species. Eventually lead shot use was banned for hunting on all US wetlands by 1991 and the recovery of target waterfowl populations soon followed. Many states have adopted additional lead ammunition restrictions for designated areas and species, while others like Arizona’s Game and Fish Department have incentivized the switch by providing free boxes of non-lead ammo and encouraging people who shoot lead to bring in gut piles.

So, what are my options?

Making the conscious switch to non-lead is easier and more effective than ever. Copper and copper alloys have emerged as a favorite for centerfire projectiles. Steel, bismuth, and tungsten shot offerings are designed with the primary focus of maximizing performance in the field. To be successful with these options, it is important to do your research and understand how they work best for your hunting needs.

Copper monolithic bullets are the industry standard non-lead option that most people will try in their centerfire rifles. As is the case with the original Barnes Bullet, non-lead expanding bullets are designed as a better “premium” bullet.  This is a performance class that holds through numerous manufacturers and has become favored by many hunters. Monolithic bullets boast superb weight retention and penetration. They are often longer than lead bullets of the same weight due to differences in density of the materials.  Which, can mean avoiding heavy caliber bullets that may not stabilize in standard barrel twist rates.

Manufacturers and reloaders have tinkered with ammo components to optimize a non-lead load. Most opt for the consistent expansion of hollow points,  adding a polymer tip to improve ballistic coefficients and expansion at range, or a fracturing projectile for multiple wound channels. The precise manufacturing of copper bullets has been proven to consistently expand and create good internal damage on game.

If you are making the conscious decision to shoot all lead-free ammo, rimfire options in common calibers like .17 (HMR or HM2) and .22 (LR, WMR, etc.) are available. The frangible rounds in calibers like .17 HMR and .22 WMR, used mainly for pest control and small game, are generally copper jacketed with a compressed powder core. These have a record of proven success. There are unique challenges faced by manufacturers in working up .22 LR rounds, but many shooters have found success after testing with their rifles.

Re-sighting is required when changing with any part of your ammunition, whether it is lead or non-lead. Always sight in before using a new round for hunting. As always, clean shots prevail.

The federal wetlands ban forced waterfowlers to adapt rapidly some 30 years ago but also saved millions of waterfowl yearly that were ingesting lead. Steel is the most prominent shot offering, but requires barrels that are designed to shoot it. Most guns manufactured after 1987 are rated for steel- the barrels often carry the fleur de lys symbol (⚜). Modern wad designs also help minimize contact but check with your gunsmith and observe ratings on choke tubes before trying new loads. If you have an older shotgun or a Damascus steel barrel, bismuth is recommended in most cases. 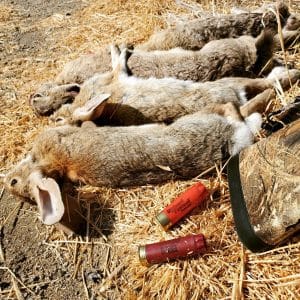 Denser metal shot types (from highest to lowest- tungsten, lead, bismuth, and steel) tend to maintain velocities better downrange. However, their success relies on understanding the properties of that metal. The branded non-lead options are too numerous to put by name here. Each has its own special shot shape, wad design, or powder formula, but most manufacturers recommend their loads be patterned to test effectiveness at various ranges.

When making the switch, observe weight differences of metal and adjust accordingly. Steel, as a rule of thumb, should be shot two sizes larger than lead. For example, size 6 lead will require size 4 steel (learn more about ammunition basics). Bismuth generally uses the same recommended shot size as lead. Tungsten comes in a variety of densities, which can use the same shot size as lead. This high density shot can also be 3 to 4 sizes smaller, like in high-end turkey loads. Along with balancing other factors that lead to inaccuracy, modification of choke size may be in order to optimize a load. A more precise list of lethal rounds needed can be found here.

Ultimately the gun chooses the ammunition, so try several options to see which performs best. Proper maintenance can help eliminate common troubles with your gun, and consistent practice at the range should narrow down what rounds your firearm shoots best and what will most effectively bring meals to your table. Your effort in butchering should also go down while shooting non-lead. This is because there are no lead fragments around the wound channel to avoid.

Please visit huntingwithnonlead.org and freely examine the evidence available on non-lead ammunition, purchase non-lead to steer manufacturing, and by all means- consider using non-lead ammunition for all your hunts regardless of requirements. Explore different rounds to find what your firearm shoots the best. The simple act of buying ammo for hunting will continue to support wildlife conservation efforts. So, keep shooting and good luck on your hunting journey.

The North American Non-lead Partnership is a group of hunter’s education instructors and biologists working to encourage the voluntary switch to non-lead ammunition.  They do this through research and testing.  The Partnership spreads the word through fellow hunters who feel concerned about the impacts of lead on their environment.  They are not around to force all hunters into non-lead ammunition.  Instead they work by providing research-based information for those interested in the topic.