This story was experienced and written by Jon Norman, The Sober Hunter. 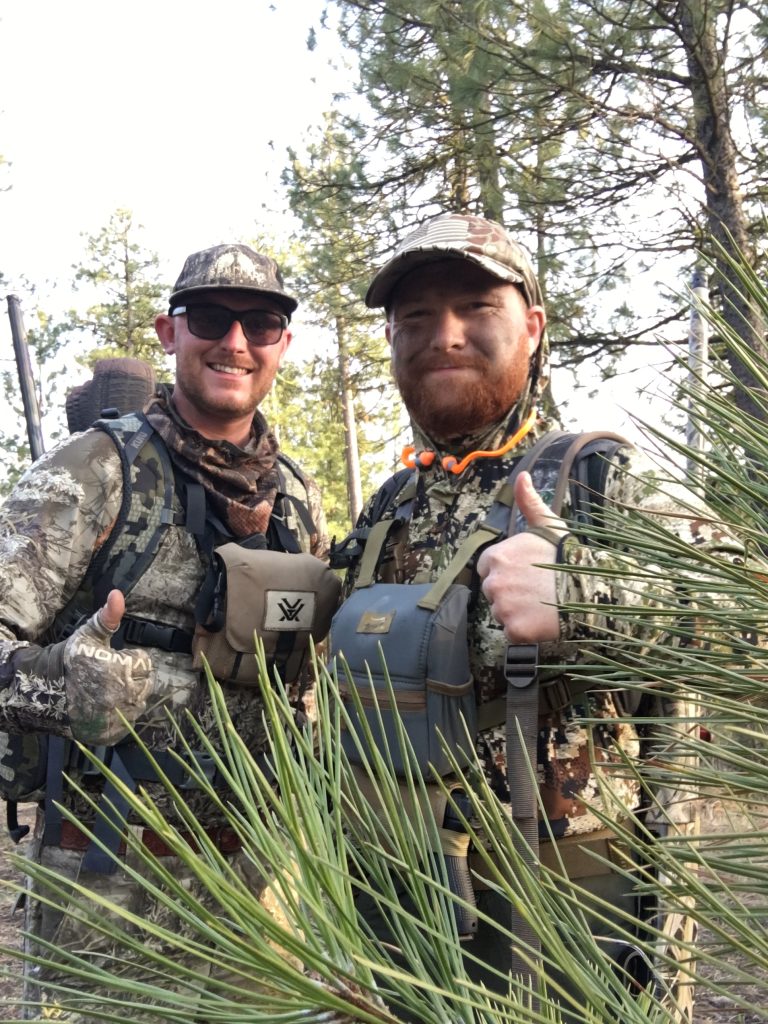 Jon and his friend Robert out West hunting Turkeys.

I set out on a 3-day western turkey hunt with my friend Robert in Washington state.

We have similar interests. We’re both dads of young kids, we share a passion for the outdoors and we love to hunt. Our spring turkey hunt was on the calendar with hopes to get Robert his first turkey. We had our spot picked out and we agreed to meet Friday afternoon.

I arrived at the designated camp spot just as the last light in the sky was slowly slipping away. Robert showed up not long after I arrived. We went over our maps on OnX and devised a plan for the following morning. Then it was lights out.

Early morning brought a heavy frost; coating the tent and grass. My main goal of the weekend was for Robert to harvest his first turkey. We hiked up to a high spot on the hillside overlooking where I’d heard turkeys gobbling the night before.

I let out a couple of soft yelps, ‘yelp, yelp, yelp’ and attempted to do a fly down cackle. Slapping my hat against my leg. Trying to mimic the sound of a hens’ wings beating as she flew off the roost.

A faint far off gobble responded to my calling but then went silent. We sat against the tree line waiting. But the bird never came in. The rest of the morning was spent hiking and trying to strike up another gobbler.

By mid-afternoon we’d had lunch and were heading out on another hunt. The sun was high in the sky, the cold bite the air had held earlier in the morning had vanished and given way to a warm breeze and clear blue skies. We slowly worked our way along the creek hoping to strike up a lone gobbler.

Walking slowly, stopping every now and then to listen and do light calling. We kept this up for an hour. I let out a soft cluck and scratched the dirt with the toe of my boot. Not even 40 yards ahead of us somewhere in the thick brush a Turkey gobbled. Exchanging a quick look of surprise and excitement I whispered, “He’s coming and it’s going to happen fast”.

I pointed to a large tree and motioned for Robert to sit there. No sooner had I gotten the decoy out of my pack I caught a flash of white feathers and a round silhouette in front of us.

The tom strutted back and forth behind a fallen tree and thick brush as I tried to shrink myself into the ground behind my decoy. He had me caught in the open.

In order for Robert to get a clear shot, the tom would have to take three steps to our left. Instead, he stayed hidden, strutting just out of sight before moving off. I cursed under my breath. I saw a similar thought going across Robert’s face.

“Could we have done something different?”

“No!” I pushed those thoughts away and motioned for Robert to follow me. Slowly working our way back, we hiked up and around to work the bird from another angle. I chose a different diaphragm call to make the tom think that a new hen was moving into the area. I clucked and purred softly. Raking the pine needles with my hand to imitate a hen feeding.

“There!” Robert whispered excitedly. Pointing in the direction of the lone gobble. The rest of the day was spent exchanging calls back and forth with the tom always staying just out of sight. A song and dance that’s been done by many a hunter and turkey before. This carried on until the last sliver of fading light gave way to the thick black night sky. Then, the tom gobbled his way off to roost.  He would live to see another sunrise.

Back at camp sitting around the fire, we recounted the events of the day. Talking through the emotions we were feeling. The highs, the lows, the excitement of seeing such beautiful birds, the frustration of being so close, but not getting a shot. Feelings I felt before but in an odd way sharing them with Robert somehow brought us closer.

Sharing our experiences opened an avenue to much deeper, meaningful conversations throughout the weekend. Including what hunting means to us as new hunters. Our lives, our fears and our aspirations. These conversations always carried on late into the night.

The second day was much like the first. A quiet start to the morning and then a very active afternoon. We worked a tom off and on until dusk. He eventually moved down the hillside away from us. Crossing the valley floor to a flat spot in the hillside. We quietly walked up the road near our camp. Following the sounds of flapping wings and rustling of branches. After a moment a deep loud gobble ripped through the night air. His announcement to the world that he’s made it through another day. As if to say to us “I’m still king of this hill”.

The third morning arrived with turkeys gobbling as our alarm clock. Robert and I quickly but quietly made our way through the pre-dawn dark. Picking each step carefully before placing our feet down we set up 75 yards from the roost tree and waited. The tom dropped down in silence about 50-60 yards off to our left. The only reason we could see him was his white banded tail feathers.

Softly calling to him, he responded, strutting back and forth while looking our way. A few moments later he turned and walking the other direction dropped down the hillside out of sight. The next 20 minutes happened fast. We quickly made our way back to camp to grab the car and drive around one of the logging roads. We wanted to try and get out in front of the turkey we had just seen.

Making our way up the logging road I saw a second tom strutting just off to my left. I pulled the car over, out of sight of him. Leaving the car and creeping back towards where he was strutting.

He had been standing in a small clearing. Crazy circles decorated the ground from his wing tips dragging in the dirt.  Looking around the clearing, I’d thought he’d moved down the crest of the hill when we drove by. Silently creeping to the edge of the grassy hillside and peaking over. There, a mere 30 yards down the hill from me stood a tom and his hen. Turning, they both looked straight at me. The hen bolted. With a few strong flaps of her wings, she launched off the hillside.  Disappearing out of sight.

The tom started to move as well. Raising my shot gun, quickly I aimed just below his neck line and pulled the trigger. “Bang” my shot gun barked. I watched the tom flap and roll down the hill. As the blast was still echoing across the valley, the original Turkey we’d been chasing, ‘shock gobbled’ again farther down the canyon.  Turning to Robert, his eyes big with excitement and smiling he said “Did you get one?”

“Yes, I think so, I’ll be right back.” Running down the hillside to where the bird had stopped rolling. It was a beautiful bird, with clean white wing feathers. Sporting 1-3/8-inch long spurs and a 7-inch beard. Totting the bird up the hill we bumped fists in celebration.

Notching my tag, I replied “Now it’s time to get you a bird.”

We continued hunting through the morning, but the woods remained silent. We tried a few more locations before calling it a day.

Before parting ways, we broke down the turkey together. With me demonstrating how to remove the breast and leg meat. Then he finished the other side on his own.

Driving home I reflected on our time spent in the woods together.

I realized this trip was about more than just getting a turkey. It was an adventure; full of beauty and exhaustion. Disappointment and excitement.

Oh, the lessons to be learned.

Battling the moments when my thoughts would get derailed. With the nagging urge that success somehow rides on my ability to bring home an animal. But really how do I define success?

I’m realizing it’s the process of navigating the highs that come with harvesting an animal, but also, the days spent getting skunked. It’s these lows that make the highs so amazing.

It’s the time spent learning to be a woodsman.

It’s the hours of research.

It’s the small voice inside. Questioning “Do I have what it takes.”

At that moment you yell back “YES”!

Forcing yourself to push deeper.

Finding the lessons to be learned.

That is my definition of a successful hunt.

Robert and I both agreed we became better hunters, better fathers, and better men through the course of the weekend.

We already have plans to go back out later this spring or fall to pursue these incredible birds. I would love nothing more than to share the experience of my friend shooting his first turkey. 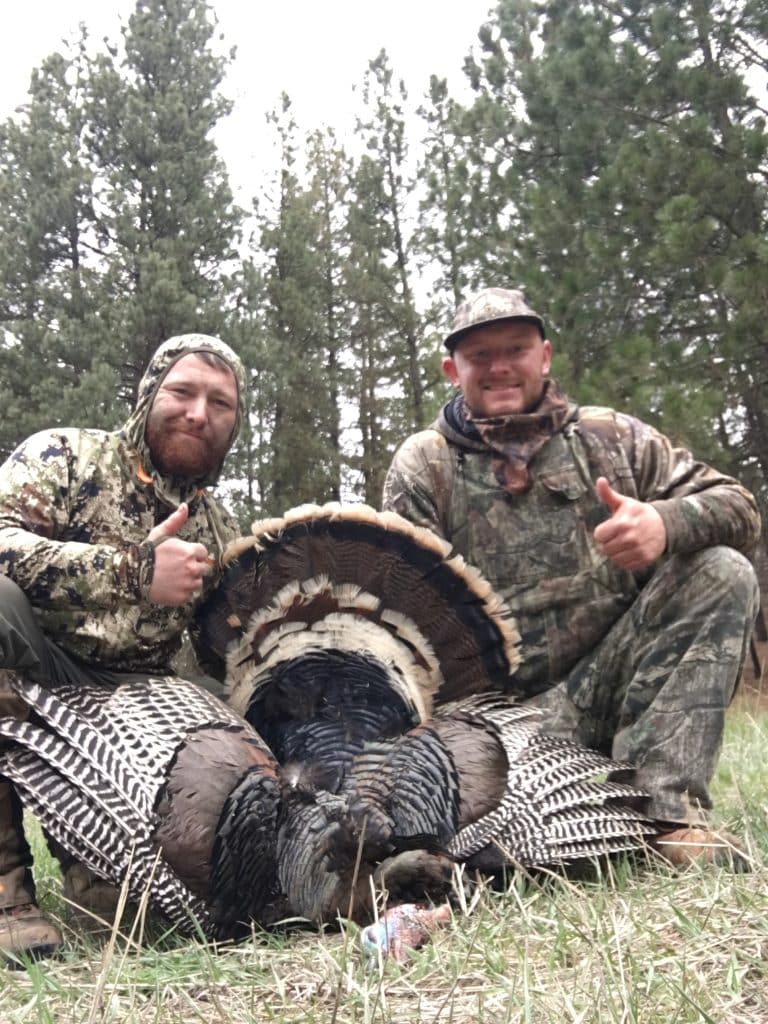 Jon with his beautiful western turkey.

Are you a turkey fan?  More turkeys with Modern Carnivore!

How to Archery Hunt for Turkeys – Practice and Patience