This is part one of a three part story by Ryan Monaghan about his first turkey hunt with his dad in New Hampshire.

Editor’s Note: This is the first of three posts by Ryan Monaghan. Ryan is a commercial and editorial photographer who lives in New York City. In this series Ryan shares the experience of his very first turkey hunt. The beauty of his story is that it touches on so many of the foundational connections that hunting can reinforce: new adventure, great food and strong relationships. I hope you enjoy Ryan’s story as much as I do.

A Morning To Remember

“Right there, he’s RIGHT in front of us!” I whisper-screamed to my dad, who was sitting next to me in a small pop-up blind. I only saw the lead jake at first, he was ahead of the rest of his gang, walking silently through the wet forest not 20 yards in front of us. We’d watched them feeding for several hours far down the field that morning, calling on and off to them, changing the position of our decoys when they went out of site. And suddenly they were right on top of us…

If I could find any silver lining to the current Covid-19 pandemic, it was that I found myself living temporarily in rural New Hampshire during turkey season. My boyfriend and I left our New York City apartment in March when we realized we’d be working remotely for the foreseeable future, and that my parent’s home near the White Mountains would be empty until they returned from Florida later in the Spring. As soon as we got settled in, my thoughts turned to the outdoors, and how to make the most of our circumstances. I’d never spent any considerable amount of time outside of the city during Spring, and I wanted to take advantage of the hunting, fishing, and foraging opportunities around me. Though I’d hunted whitetail deer for years, the only thing I knew about hunting turkeys was what I’d seen watching Meat Eater. In April, however, I signed up for the Modern Carnivore turkey hunting webinars, and they proved to be an incredible resource. I quickly had a grasp of the basics: general turkey behavior, distinguishing toms and hens, scouting for birds and finding where they roost, as well as the basics of calling. I had a lot of homework to do before opening day. I needed to practice calling, pattern one of my dad’s shotguns, and locate some turkeys in a place where I could hunt.

April mornings found me going for long runs along the main road through my new rural community, binoculars in hand. Every time I’d spot turkeys, I’d take a break from the run and watch them through the glass. I’d take my phone out and mark a waypoint on OnX noting how many turkeys were in the group, and later that day ask my dad over the phone if he was friendly with the landowner. Before long I had found two locations owned by friends of my dad where I was consistently seeing birds, and I’d secured permission to hunt both spots. During breaks in the day I’d practice calling. I chose a 12 gauge pump from the gun safe in the basement and patterned it in from several distances. I was feeling ready. 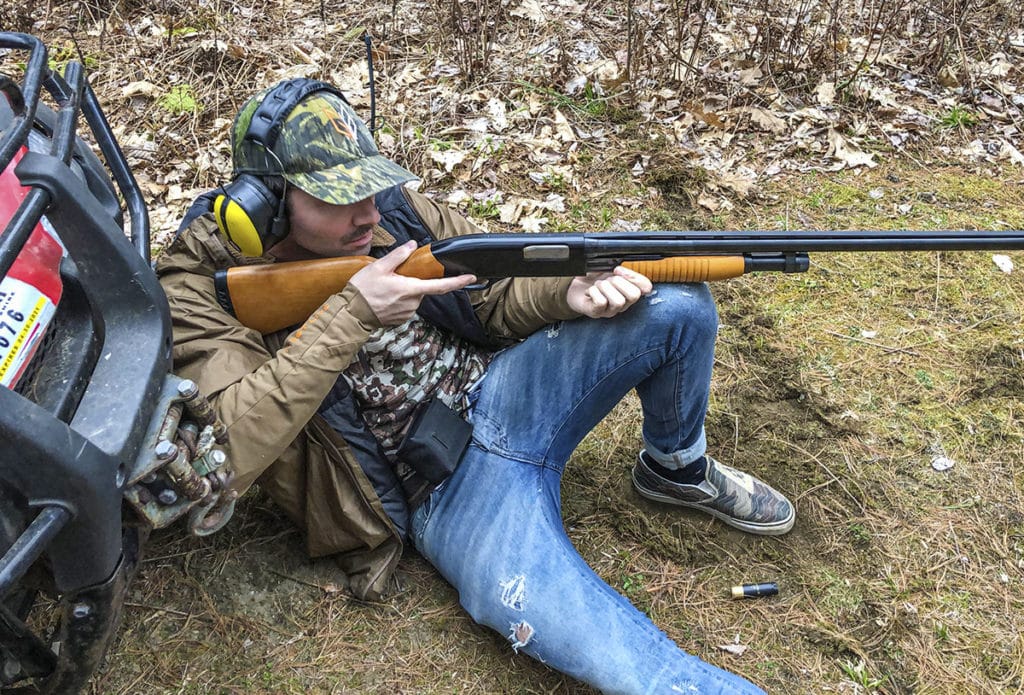 Ryan patterns his father’s shotgun in preparation for his first turkey hunt.

A few days before opening day, my parents pulled into the driveway after making the long trek North from Florida. The next evening, my dad and I drove to a spot where we could glass one of the fields I’d scouted where we’d been given permission to hunt. We saw a large tom in full-strut courting a hen on one end of the field, and closer to the road we saw an even larger tom, slowly making his way to the wood line at the end of the field. We watched him through the binoculars for a half hour, and at one point heard the hoot of an owl. The tom gave an immediate reply by way of a gobble. The birds conversed back and forth for the next ten minutes while we watched the tom head for a group of pines. We knew where we’d be opening morning.

If you’re interested in learning to hunt turkeys and want to take advantage of the final days of free access to our online course, go to www.huntingcamp.live.