As an aspiring outdoorsman, I want to try it all. You will find many people who like to specialize in a single pursuit, but that is not for me.  Follow along with my Aspiring Outdoorsman series as I take you through my various adventures. 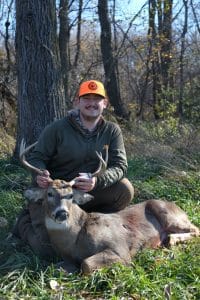 Author with his first white-tailed deer.

Anyone who has hunted white-tailed deer knows what sort of struggles will accompany you.  Many people have expensive bows, comfy blinds, climbing sticks, saddles, all of that amazing gear that is meant to help make your hunt as comfortable as possible.  As a young professional who is just getting started, I have very little of these wonderful perks.  My hunts have consisted of freezing weather, metal tree stand seats without cushions, and a hand-me-down gun.  Previous hunts of sub-freezing temperatures and the fear of falling out of a tree have really made hunting a chore.  However, this year was different.

I had a definite drive to prepare for this year’s white-tailed deer season.  Here in Minnesota the gun season opened on the 6th of November.  You can never be too sure if it will be freezing cold or relatively mild.  So this year, I went out and invested in a couple important items.

First off, good base layers are a must.  Wool is preferred but really any sort of long underwear will do the 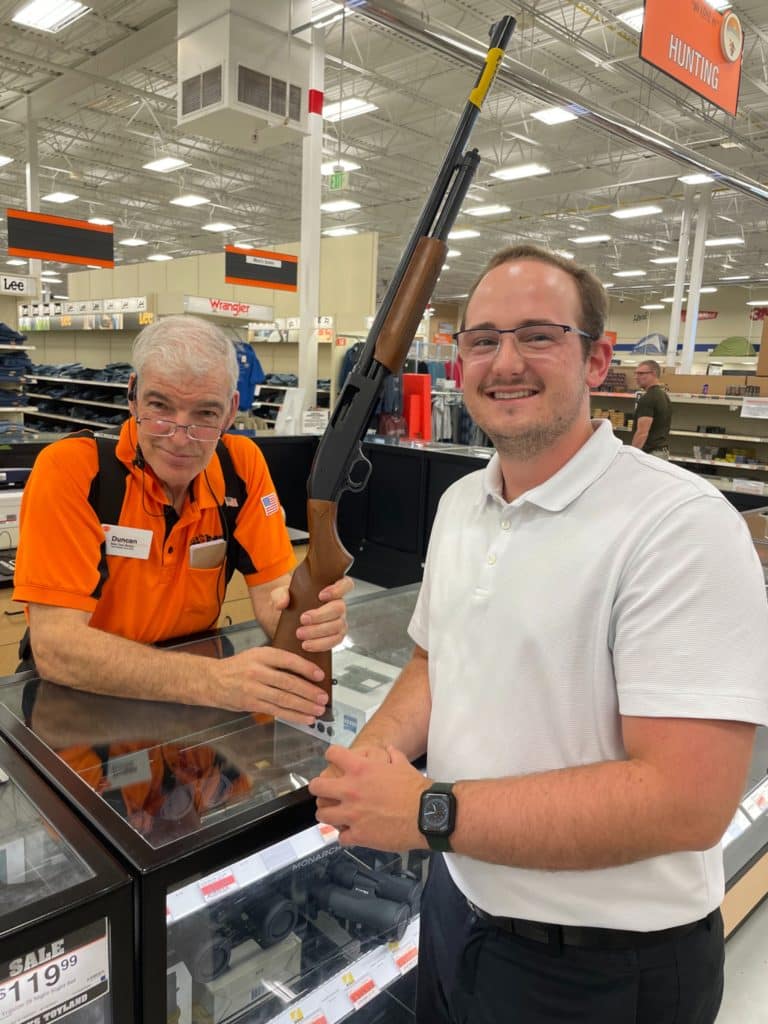 trick.  Make sure that you also buy items that you can layer easily.  The one piece of gear that I thought was a game-changer this year was the insulated hand muff.  Last year I had a great buck walk right in front of my stand but I could not get a good shot on him because I did not get my mitten off in time.  So, this year I made sure that I would not fall for the same mishap.  With the hand muff, I was able to keep my hands nice and warm without the need for mittens.

Another very important piece of gear that I went out and bought this off season was a Mossberg 500 shotgun.  For a beginner like me this shotgun was a great option.  This shotgun comes with a two barrel system that is interchangeable.  One barrel is smooth on the inside and this for hunting small game and birds.  The barrel I was using during this hunt is a rifled barrel.  This barrel is used with Sabot slugs and give a more accurate shot because of the twisted grooves on the inside.  I would recommend this firearm to any new hunter that is looking for a more widely useable option.

After meticulously studying where I was going the night before and precise directions on where I was headed, I got lost on my way.  It can be disorienting heading to a tree stand in the dark when it is your first time in an area.  However, after a little trial and error I was able to find my way into the stand just before sunrise. 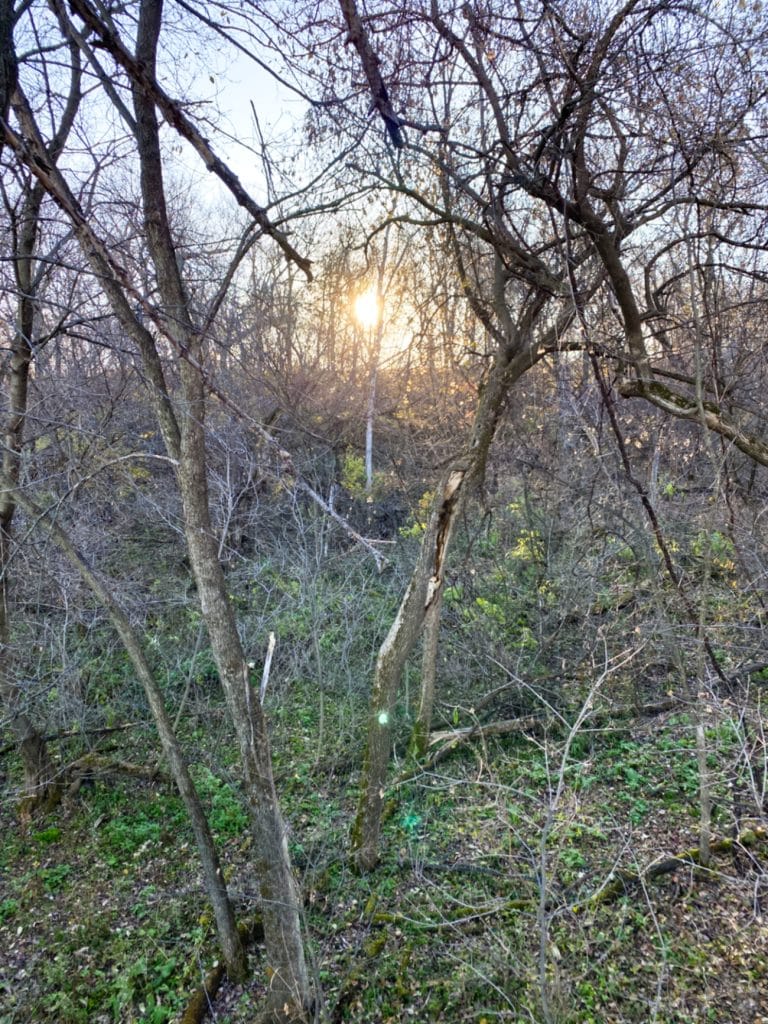 The sunrise from my deer stand.

It was such a beautiful morning.  It is amazing to sit there in the stand an be a bystander as the woods wake up.  You become part of the forest as you sit with your back against the tree.  The longer you sit there, the more the animals and birds forget you are there.  Soon the birds will start to make noise and move about the trees.  There was a group of Chickadees dancing around the forest.  They were moving so fast it was hard to count how many there were.  I sat there soaking it all in until about 11 am and that is when the real excitement began.  It was about that time I heard twigs and leaves crunching behind me.

Thinking it was probably a squirrel, I turned slowly to see a decent sized doe walking through the woods towards me.  It was so cool to watch the doe do her thing.  She was slowly walking, stoping to eat, or pick her head up every once in a while.  I watched her move around the woods for about half an hour before I heard another deer coming from the other side of the woods.

Suddenly, my heart was racing.  There, to my right, was a beautiful buck walking slowly in my direction.  It is said that patience is a virtue, and in this case that was true.  Even though I am sure it was only a minute or two it felt like forever.  I sat and waited for that buck to come closer to me.  He was walking through thick brush, in and out of shooting lanes.  I had to use every ounce of patience in my body not to take a quick and unplanned shot.  Finally I realized what he was going for.  It was the doe that had been hanging around for the last half hour.  If he kept on the same path toward the doe I would have a great shot.  I just had to wait a few more steps.  I set up my gun on a climbing peg that had been used to hang my backpack for the morning.  Looking back I believe this was a key step in my success considering how much adrenaline was pumping through my veins.  Then, the buck came in right where I needed him to.  I told myself to breathe and aimed just behind the front shoulder as I had learned.  Silence, and an explosion from the end of my barrel.  The buck took off, but only for about 30 yards.  That was when I heard him fall.  In seconds, it  was all over. 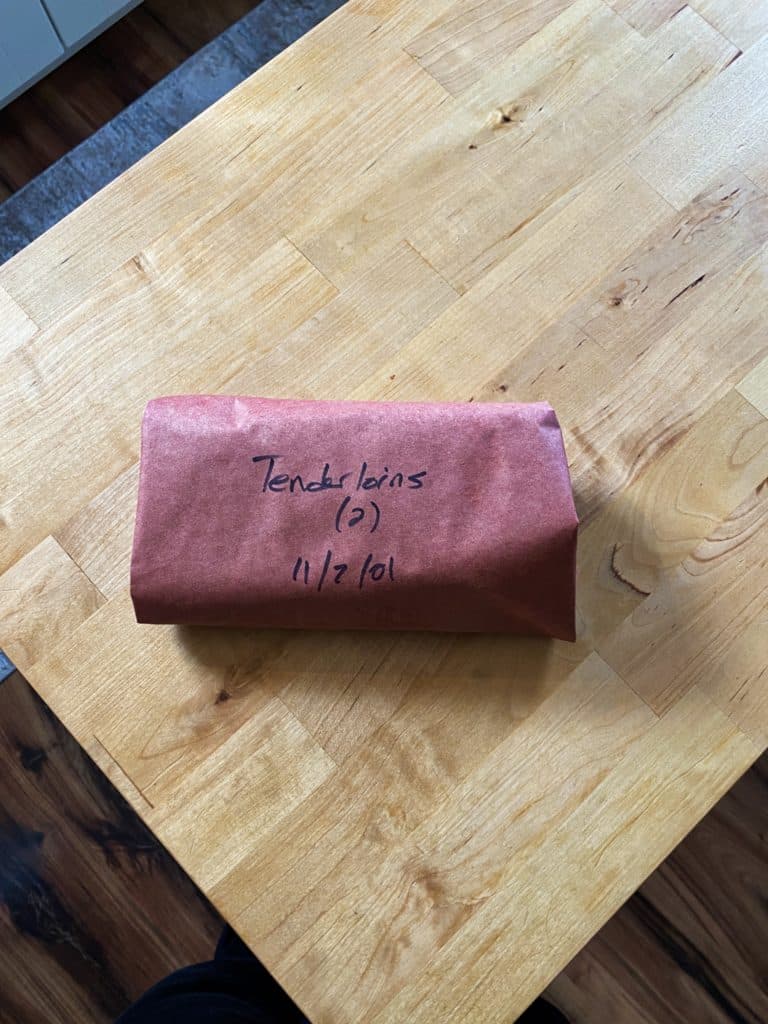 amazing, powerful animal that was walking through the woods only moments before.  You now have a connection to that animal that can only be understood through this experience. It is a deep connection through the meat it has sacrificed for you and the story that will never leave your mind.

I was very lucky to have a father-son duo with me that are both experienced whitetail hunters.  They walked me through the gutting process and I dragged it out of the woods.  It seemed like a task I had to handle myself, as this deer was now my responsibility.  Keep in mind, even without the guts these animals are very heavy.  So when you go out, make sure you have a solid plan for if you are successful.  After we got the deer back to the house it was time to skin it and part it up for the freezer.

Ask anyone that knows me well and they will tell you I am no chef.  However, it was important to me that I keep some roasts and steaks for the freezer.  Some will bring it all to the butcher for jerky and meat sticks and that is totally fine. But, I wanted to experiment with the different recipes and styles of cooking so I only took the scraps to the butcher.

As I stated before, I am not a chef.  Cooking is something that I am learning but still struggle with.  So, I turned to someone who I knew would have a delicious recipe for me to try.  I reached out to Modern Carnivore’s own Jamie Carlson.  My question to him was about a simple recipe that I could put in a crockpot and let cook all day and he delivered.  This was a super simple recipe that tasted amazing!

Combine flour, cinnamon, and seasoned salt together and dredge the venison chunks in it.  Then fry in the bacon fat for about 1 minute each side.

Place all the ingredients in the crock pot with whatever is left of the bacon fat and cook on low for 6-8 hours. Stir the stew every couple of hours.  Before serving add salt and pepper to taste.

Jamie states that he prefers serving it with a good bread and butter. This is such a simple recipe that you can prepare in the morning and let it sit all day.  I made it myself and served it to many of my friends during our holiday gathering.  Everyone really enjoyed the dish, even those who claimed to “not like venison”.  As Jamie would say, you have to cook it right.  Thank you Jamie for the awesome recipe.

If you liked this story check out more from the Aspiring Outdoorsman Series!!