Rick and Connie Whittier were wide awake when they heard the stranger at the door at 1:00 am.  It was November 4, 2004 and both had recently retired from careers in law enforcement, and Whittier Decoys wasn’t yet a thought.  Both were adjusting to what they had heard friends call “regular hours” for so many years. Those long hours Connie spent working dispatch and Rick spent in the patrol car also provided them with a sort of sixth sense earned only through decades on the job.  In this instance, the sporadic cadence and intensity of the knocks on the door gave their visitor away– he was drunk.

Rick didn’t think twice before opening the door to greet the unexpected visitor.

“Hi there! I heard you’re new in town, and that you know woodworking.”

“Take a look at these!” said the guest as he produced two small frog decoys from the pocket in his parka.

“Tomorrow is the spearing opener, and I was wondering if you could make a few more of these for me?”

About six hours later, Rick and their guest had completed a few darkhouse spearfishing decoys.  They used scrap wood and cut sheet metal fins from the Whittier’s storm door.   These decoys were the first of thousands that the Whittiers would make over the next two decades as Whittier Decoys.

Characteristics of a Whittier Decoy

Since that cold November night, the Whittiers figure they have produced somewhere in the neighborhood of eight thousand Whittier decoys.  Their processes, pricing, selection, and functionality come together for a unique style of decoy.  Connie describes her husband as “always tinkering.”  He’s created techniques to cut out small decks of fins at once.  He has developed a special roller that gives a scaled texture to his decoys without the intense labor of hand-burning each scale.  He even borrowed a technique from a Las Vegas street artist to blend various generic spray paints to get colors typically only possible with an airbrush.

For all of this expertise, the Whittiers set a price well below their fellow carvers.  They get $40 per large decoy and $30 for small decoys.  At big-box outdoor retailers, you can find a plastic mass-production decoy for around $25.  Hold one of those next to a Whittier, and you’ll see a tremendous difference.  Hold one of their decoys next to a $100 handmade decoy, and you’ll be hard pressed to find any substantial differences beyond the price tag.

When it comes to selection, Rick and Connie have nearly 400 different designs.  Many of them are replicas of fish ranging from  salmon to sunfish.  Many others include flashy neon colors and their famous pink “bloodrunner” decoy.

When I asked Connie what made their decoys special, she didn’t skip a beat.  “You just have to swim one and you’ll know.  We bring a tank to all of the decoy shows.  We pride ourselves in how our decoys swim.”

Spearfishing decoys are both art and a tool.  The Whittiers have gained well deserved notoriety among darkhouse spearing enthusiasts.  Their crowd of admirers stretches well beyond the traditional spearing states of Montana, North Dakota, South Dakota, Minnesota, and Michigan.  This year, the curator of the Boston Museum of Fine Art, which houses the largest collection of Folk Art in the world, made the trip to Lidgerwood to see Rick and Connie.  They brought a couple of decoys back to Massachusetts for the museum.

Making Whittier decoys brings a lot of joy to Rick and Connie.  They enjoy talking to customers, they enjoy telling stories, and most importantly, they find joy in bringing each decoy to life.  They share this with senior citizens in their community.  For many years, they have brought  blank decoys, brushes, and paint to the seniors at nearby assisted living facilities.  They have taught them to paint and swim their own decoys.  Staff at the centers have noted how the decoy painting is among their most popular activity.  Residents who rarely participate in other activities are among the first in line for paint and at the test swim tank. 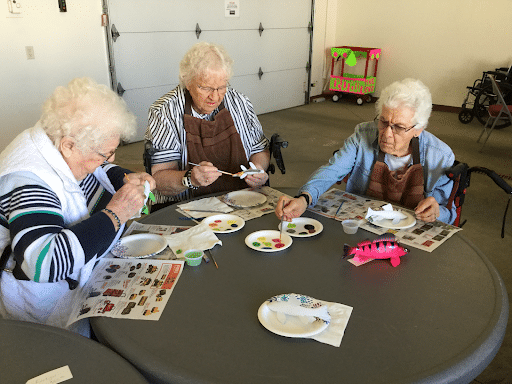 The Whittiers also share their knowledge openly.  After experiencing a couple of discouraging cold shoulders early in his carving career, Rick resolved to teach all of his Whittier Decoy techniques to anyone who cared to learn.  Through the North Dakota Council on the Arts, they have formalized this transfer of knowledge into an apprenticeship for aspiring decoy makers like Melissa Shockman, whom we profiled in a recent post.

No Signs of Slowing Down 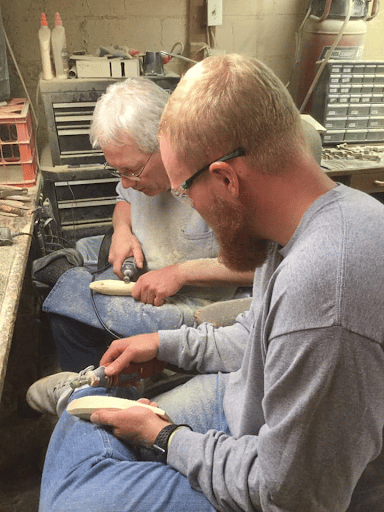 It was nearly 11 pm on a school night when my two hour conversation with the Whittiers wrapped up.  The Whittiers still keep what others would call “irregular hours.” They stay up most of the night cutting, carving, sanding, weighting, and painting decoys.   Talking to them was invigorating.  There is something contagious about hearing someone talk with unbridled passion and enthusiasm for, well, just about anything.  The way Rick sees it, “I want to pass on what I know to the next generation, I won’t be able to make these forever, and someone’s going to figure out how to do things better than me, and it makes me so happy to imagine that.”  Rick and Connie still had many hours of filling orders ahead of them.  Most customers order online or over the phone, but both said they’d still fill any orders received at their front door at bar close.

More from our Hardwater Hunter’s Series!